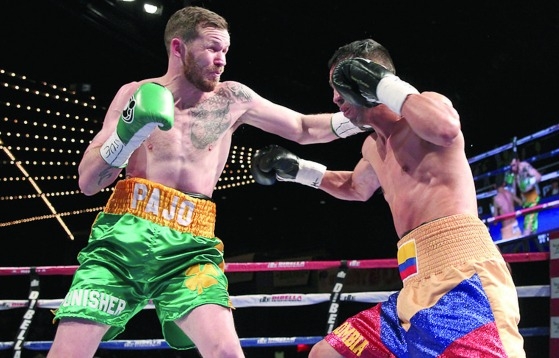 PATRICK Hyland is hoping the MGM ‘Clash of the Clan’ Show in the National Stadium on February 6 will provide a major springboard for what could possibly be a career defining year for the Tallaght boxer.

Hyland will be returning to fight in the Stadium for the first time since June of 2011 when he beat Phillippe Frenois for the WBF World Featherweight title.

And he is confident he will notch up the 32nd win of his professional career and pave the way for another big show in the US a month later.

“The plan for me after this fight is to get a decent fight in New York or Boston in March” he told The Echo.

“The lads in England are avoiding me so I’ve got to take the hard route in the US” he explained.

Hyland has been preparing for February’s outing in Celtic Warriors Gym where he has really made some great progress.

“I’m getting in some good sparring with John O’Carroll, Stephen Ormond and a new lad Alan Phelan.

“The hardest thing for me was not to be training with Tracey Patterson in the US, but getting over there for just three weeks training is hard.

“I’m working full time and, since my dad died it’s been hard to get motivated at times.

“But I still needed to have someone there pushing me and guiding me and there’s a good vibe in that [Celtic Warriors] gym.

“I’ve been going there from time to time for years now and it’s almost a home from home for me” he added.

Among the other local fighters on the bill for February are Stephen Ormond, Jamie Kavanagh and Philip Sutcliffe.

Ormond fought four times in 2015, winning three of those contests but losing his WBO European Lightweight Boxing title to Terry Flanagan in Wolverhampton back in February.