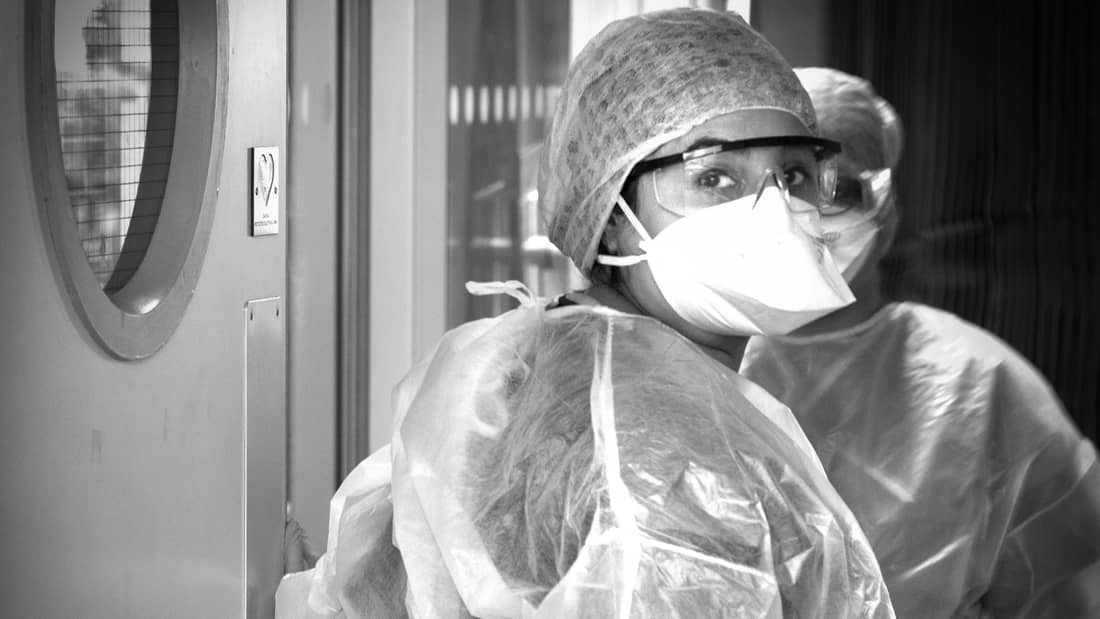 ICU team praised for its ‘admirable’ work during Covid

THE ICU team at Tallaght University Hospital has been praised for its “admirable” work in managing one of the highest number of critical care Covid-19 cases in the country – despite having a low number of ICU beds.

Professor Gerry Fitzpatrick, a Consultant Anaesthetist Intensivist at Tallaght University Hospital (TUH), has praised the ICU team at the local hospital for its professionalism and bravery over recent months.

Members of ICU team at Tallaght

After spending ten years working in the Meath Adelaide and the National Children’s Hospital, Prof Fitzpatrick came to work in Tallaght when the hospital first opened in 1998.

After some 22 years working in theatre and ICU, and spending four years as Medical Director and a stint as Acting CEO, Prof Fitzpatrick was due to retire in March.

However, he was asked to stay on to assist with the development and organisation of the hospital’s critical care response to Covid-19.

According to figures released, 285 people who tested positive for coronavirus were cared for at Tallaght University Hospital between March and June.

Some 32 patients who tested positive received critical care in the hospital’s ICU.

“When we were coming into March, we didn’t know how things would unfold or how extensive it would be”, Prof Fitzpatrick told The Echo.

Professor Gerry Fitzpatrick cutting the cake at his retirement

“In the early days, the public and the [hospital] staff were fearful and apprehensive, no one in truth knew what was going to happen.”

According to Professor Fitzpatrick, the hospital had to take its critical care plan a lot further than envisaged as the team delivered high quality and professional care to patients while also maximising the safety of staff.

“Particularly in ICU, staff were in a situation that put themselves and their families at risk”, Prof Fitzpatrick said.

“However, they were so well prepared, so brave and courageous…. it was admirable to watch them work.

“I am very proud of them and very proud to have been a part of the team.”

When asked where he believes the Covid-19 crisis is at present, Prof Fitzpatrick said: “In terms of a second wave, I have no more insight into it than what you’re hearing… a lot at this time is speculation.

“One thing I do know is that the biggest strength at Tallaght University Hospital is the calibre of the staff.

“The community should be really assured by their professionalism and dedication, they are highly trained staff.

“The community should be confident in the team’s ability to weather any challenges that may be to come.

“TUH has a low number of ICU beds, way less than required.

“However, despite having one of the highest number of ICU coronavirus cases in the country, the ICU team managed the situation with professionalism and sensitivity and achieved very good outcomes.”

Looking back to when Tallaght first opened in 1998, from a merger of three hospitals, Prof Fitzpatrick said that there was some teething issues.

However, he believes that the TUH of today has a clearer picture of its identity and has over the years been able to attract a high calibre of staff – alongside integrating into its surroundings and actively engaging with its community.

Believing that TUH has, in general, had a “shortage of beds from the get-go”, Prof Fitzpatrick hopes that HSE funding is delivered for the development of a new 12-bed ICU unit on campus, which was granted planning permission in 2018.

As reported in The Echo in September 2019, TUH was at that time running at 112 per cent occupancy of its critical care capacity.

“I will miss the hospital, I’m going to miss the people that’s for sure”, he said.

Prof Fitzpatrick is not totally stepping away from healthcare and will be on the boards of the national Independent Patient Safety Council and the Safety and Quality Committee of the World Federation of Societies of Anaesthesiologists.

Commenting on Professor Fitzpatrick’s retirement Lucy Nugent, CEO of Tallaght University Hospital said: “Gerry has been a long standing colleague to many here in the hospital not only as a Consultant Intensivist but also as the former CEO and will be widely missed.

“However I cannot express both my personal and the hospital’s gratitude to Gerry for delaying his retirement when the Covid pandemic kicked off.

“His leadership skills came to the fore as he led out on the pandemic plan for critical care which successfully saw the ICU team cope with a surge in ICU cases.

“His commitment to the hospital and patient care since its opening is exemplary.”