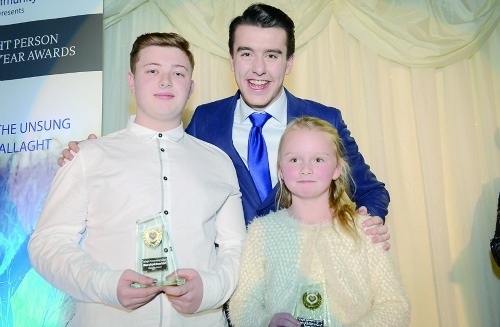 TWO special hearts of gold were recognised at the 32nd annual Tallaght Person of the Year awards night in the Red Cow Pavilion last Friday, November 20.

Ross-Lee Fennel and Simone Hiney were awarded the Heart of Gold, a category that recognises young people under the age of 18 who are making a difference in the lives of their families and people in their local community of Tallaght.

The two Heart of Gold winners were joined by family and friends as their compassion for other people and bravery in facing everyday challenges were celebrated by the people of Tallaght.

Simone, who is from Killinarden, was awarded the Heart of Gold for being a “thoughtful, understanding and patient sister” to her siblings Grace and Jack, who are faced with both medical and physical challenges as they live with autism and cerebral palsy.

Ross, who is from Glenview, was described as a “pro-active, determined and caring” teenager and was recognised for his great efforts in highlighting the issues surrounding bullying in his school and local community.