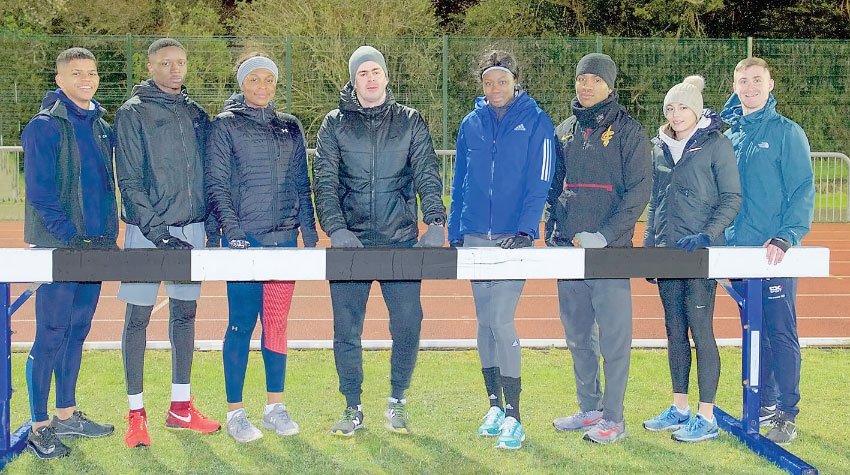 Ireland’s elite on track in Tallaght

Kilgallon joined Tallaght AC back in 2010 having promoted athletics as a sports officer with the County Dublin VEC and is currently coaching a core group of elite athletes that includes European Under 18 200m champion Rhasidat Adeleke and her fellow World Under 20 4x100m Relay silver medallist Patience Jumbo-Gula.

While he is employed by Athletics Ireland as National Sprints Coordinator, Kilgallon’s work with these athletes in Tallaght is done on a voluntary basis.

Originally from Ballina, he was invited down to Tallaght AC by club stalwart Cecil Johnston and there he met Tallaght Sprints Coach Tony Byrne.

“Tony is still there, looking after more a beginners sprints group and he still plays a big part in that side of it.

“He is some-one who is really in tune with the needs of sprinters and, as a coach, he has been a great mentor and a friend to me” he told The Echo.

Kilgallon was appointed National Sprints Co-ordinator last May and started in the role in July.

Prior to that he occupied the post of National Relay Coach from back in 2014, enjoying no shortage of success on the international stage as he oversaw a seventh place finish in the European Under 20 Championships for the Ireland 4x100m Men’s team, that included Ojewumi and Doherty, the following year.

In 2016, his Under 20 Men’s 4x100m Relay team of Sean Lawlor, Ojewumi, Doherty and Killian Greene set a new national record on their way to 14th place in the World Championships.

What’s more he coached Adeleke, Jumbo-Gula, Miriam Daly and Niamh Foley to bronze in the 2017 European Youth Olympics in Hungary.

After his appointment as National Sprints Coordinator last year, he stepped down as National Relay Coach but continues to co-ordinate the relay programme, working will all the coaches involved in that.

With the likes of Jumbo Gula, Adeleke and Kate Doherty coming on board with the original Tallaght contingent, Kilgallon’s group has become a lot more competitive with each athlete inspired and driven by the achievements of the other.

“The level of the group has definitely risen with the calibre of athletes that have come in” agreed Kilgallon.

“Simon and Tim are regularly doing PBs and Eoin Doherty has been picking up medals here and there.

“I have a road map set out for these athletes to help them make it to where they want to go and help them meet their goals.

“One of the things I’m most proud of is looking at Joseph coming through the youth and junior ranks and staying in with it and winning a National Senior title, Eoin Doherty still involved and winning medals.

“While it is exciting to be involved, you are always worried if are you doing the right thing for these athletes.

“As a coach, I’d be very cautious, particularly when it comes to injuries. For me, long periods of uninterrupted training is key to making it up to the next level.

“I love the winter, between September and December, because the athletes just train and there’s a good vibe in the group.

“Having the track in Tallaght is great. It’s not the fastest track, it’s more suited to middle-distance running, but it’s great for training because it’s not so hard on the joints.

“It was great foresight by the committee in Tallaght Athletic Club to get that facility developed” he added.

Certainly it is an exciting time to be involved in sprint athlet-ics in Ireland and Kilgallon is among those at the heart of it.

Only last week it was announced that Ireland will be fielding a women’s 4x100m team, that includes Adeleke and Jumbo-Gula along with Ciara Neville, Gina Akpe Moses, Joan Healy and Niamh Whelan, in the World Senior Relay Championships in Japan this coming May.

A top-ten finish there will see them make the cut for the World Senior Track and Field Championships in Doha which will provide one route towards Olympic Games qualification in Toyko 2020.

And while he hopes to have his sprinters competing on the highest of senior international stages, Kilgallon, as National Relay Programme Coordin-ator, is hopeful Ireland will be fielding two 4x100m teams and as many 4x400m relay teams in the European Under 20 and 23 Championships in Sweden later this year.