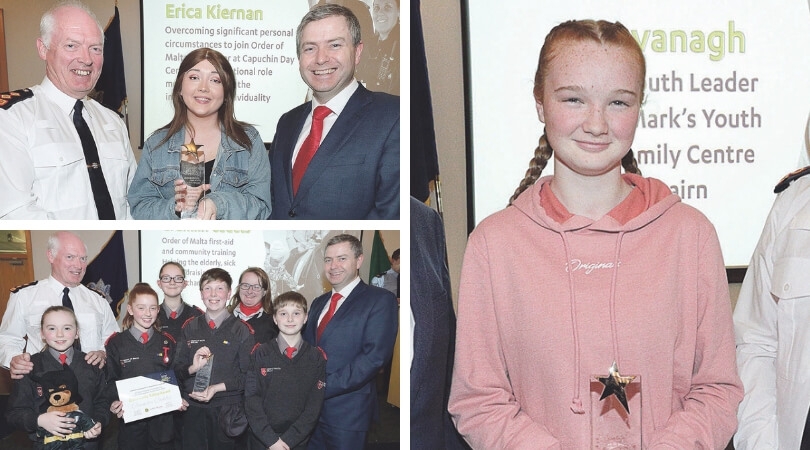 THE recent Garda Youth Awards recognised the impact young people have throughout the areas of DMR South, and the positive steps they take each day to enhance the lives of their friends, families and communities.

The inaugural awards were staged in Tallaght Stadium, and celebrated outstanding young people, between the ages of 13 and 21 years, who were nominated under the four categories of Individual Award, Group Award, Special Achievement and Community Safety.

The DMR South division includes Tallaght, Crumlin and Terenure and their respective sub-districts of Rathfarnham, Sundrive and Rathmines.

Here are the local faces who scooped the four main awards on the night and will go forward to represent the area in the national finals...

Ciara Kavanagh is a youth leader in the Jokers and JR youth clubs, which work with young people aged seven to 14 years.

Ciara is committed to youth work and believes each child can achieve their goal in life if they believe in themselves. Ciara was nominated by Marie Mulligan in Fettercairn.

Crumlin cadets train each week in first aid and life-saving skills, which they put into practice within the community.

They are not only first aiders but spend time helping the elderly and the sick in the community. Raising money for charities too.

Early in life, Erika was diagnosed with alopecia and in secondary school her condition worsened.

According to Mary Ellen Murphy, Principal of Loreto College, who nominated Erika, the teenager took a considerable step in third year and came to school with ‘no hair piece, no wig, no hiding’.

In transition year she volunteered in the Capuchin Day Centre and became a first aid responder. In sixth year when others were stressed, she reassured and guided her peers.

Erika was nominated for the ‘enormous contribution’ to her school and community.

Frances and Jenna attend the dance class as volunteers.

According to nominator Paula Coughlan of Cheeverstown House, even the shiest of children and those on the autism spectrum find the confidence to come out and dance with Frances and Jenna.

They show tremendous empathy and patience, and volunteer all year round – including midterms and summer holidays.

While Claudia Scanlon won’t go forward to the national finals, judges felt the need to honour Claudia on the night for her incredible courage and for the great work she does to raise awareness for EB or ‘Butterfly Skin’ – including her ‘See me not EB’ campaign with Debra Ireland.

The Garda Youth Awards DMR South are supported by Transdev, the Luas operator.