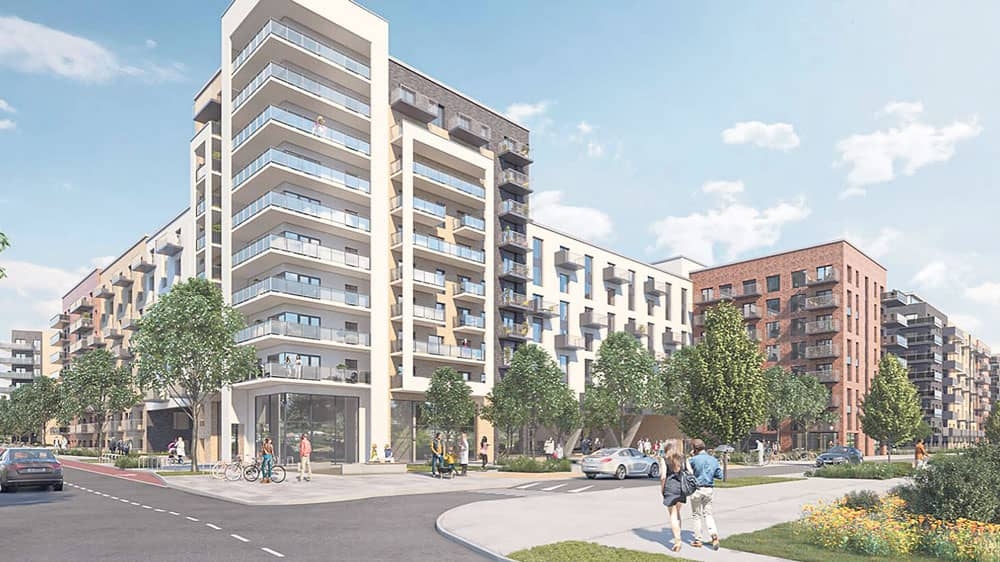 IRISH Water has withdrawn certificates of feasibility for two substantial SHD developments in Cookstown as a result of sewerage issues – which could lead to delays in the plans for the housing projects.

Certificates of feasibility are issued by Irish Water to developers as confirmation that, at the time of issue, a connection to Irish Water infrastructure is feasible.

An artist impression of Cookstown Castle

The Echo understands that certificates that were issued for two residential developments, which are currently under consideration by An Bord Pleanála, were recently withdrawn by the water utility company.

As reported in The Irish Times, there are issues with large volumes of rain water going into the Dodder Valley sewerage network, which could then risk floods of noxious waste water. This led Irish Water to rescind the previously issued certificates.

A spokeswoman for Irish Water told The Echo that the central sewer system in Dublin was built in the late 1800s and early 1900s and carries both wastewater from homes and businesses and water that is drained off roads and pavements.

This combination of wastewater and rain water causes constraints in the capacity of the foul sewer.

“This is known as urban creep as the original foul sewers are not designed to take this additional flow,” she explained.

The Glen Abbey Complex plans on the Belgard Road

“Irish Water is engaging with Local Authorities, who have responsibility for public storm water infrastructure, and developers to look for solutions to minimise the impact of storm inflows into the sewer network in order to reduce the capacity constraints in the foul sewers and enable growth and development.”

Independent councillor for Tallaght Central, Mick Duff, told The Echo there are concerns that “excess pressure” would be put on the Dodder Valley sewerage system by the proposed large residential developments in Cookstown.

When asked about the feasibility certificates being withdrawn, Cllr Duff said: “When I heard about this first, my reaction was very simple – I wanted confirmation about what impact it would have on projects such as SHDs or any other developments that have been given planning permission.

“We won’t know what the impact of this will be until we have further clarity from Irish Water.

“I’m looking for an explanation from them and details on how they plan to rectify this.”

The Irish Water spokeswoman said: “The survey stage of the Drainage Area plan for the Dodder Valley area is nearing completion and we will have a clearer view as to what solutions are required by July.

“Once we have identified the upgrades required, we will invest in the networks to provide the capacity to support housing, subject to funding and planning approvals.

“As an immediate intervention Irish Water will work closely with South Dublin County Council in relation to areas where there may be benefit in investigating and removing misconnected flows that have resulted in large areas of paved area being connected to the foul sewer.

“Please note that Irish Water is not rejecting applications for Strategic Housing Developments and we will have a clearer view of proposed solutions for Cookstown shortly.

“We continue to encourage developers to engage with us on their plans.”