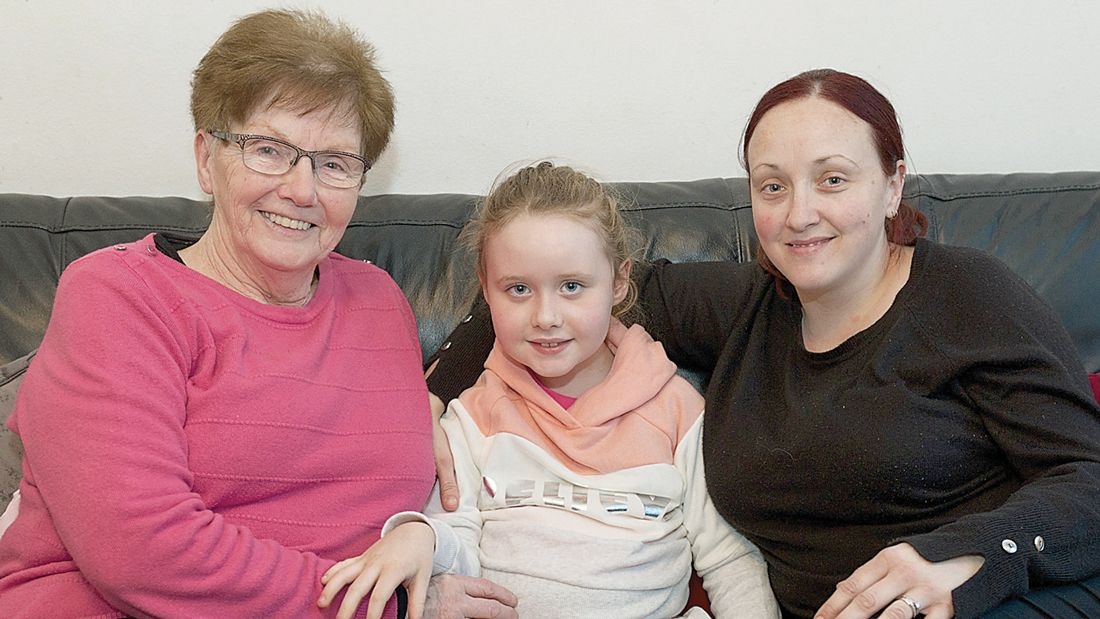 ‘It’s an absolute miracle’ that Ellie is home

JUST over two weeks ago, seven-year-old Ellie Bolger underwent an eight-hour operation to remove part of a tumour wrapped around her spine.

Despite her medical team foreseeing a number of days in ICU followed by months in hospital, inspirational Ellie was back in her nanny’s house seven days after her operation - and in time for Pancake Tuesday.

Ellie was diagnosed with a spinal tumour when she was just two-and-a-half, a condition that has been monitored through MRI scans for the past five years.

However, according to Ellie’s mam Joanne, who grew up in St Aengus Green and is a past pupil of Tallaght Community School, the tumour started to change in recent months – causing Ellie’s back to bend from the neck down.

“We were told that Ellie needed surgery,” Joanne told The Echo.

“The worst case scenario was that Ellie could have been paralysed for life due to the operation,” Joanne said.

“Best case scenario would be a few weeks not being able to walk.”

On Tuesday, February 18, Ellie underwent an intense eight-hour operation in Temple Street, with the aim of removing enough of the tumour so that it did not impact on her posture.

“It was the longest day ever . . . and we just can’t believe where we are one week later,” Joanne said.

Following the operation, Ellie’s family was preparing for five or six nights in ICU and a long recovery stint in hospital.

However, after spending less than 12 hours in ICU, Ellie started taking steps by herself within five days of her operation.

“We thought she’d be in hospital for months,” Joanne said.

“We’d even secured long-term family accommodation for parents with children in hospital – I had brought a month’s worth of stuff with us.

“I don’t think the hospital could believe it themselves.

“It’s an absolute miracle and the pure power of prayer and goodwill. Everybody was thinking of her.”

Over recent weeks, the family was inundated with well wishes from their own community in Kildare and Joanne’s hometown of Tallaght, where her mam and dad, Mary and Patrick McLoughlin, still live.

Joanne’s mam Mary is the founder of the HOPE Suicide Prevention Drop-in Centre in Tallaght.

Alongside all of the good wishes, Ellie was the inspiration behind a pen-pal campaign started by a family friend and Tallaght resident, who invited primary school kids across the area to write to Ellie as she recovered.

“Everyone has been so kind, it’s overwhelming,” Joanne said.

“We cannot thank people enough for their prayers and support for the whole family.

“Ellie has received a number of cards from local schools, and it’s really cheered her up.

Ellie was delighted with a number of cards she received

“She’s been reading the cards and is over the moon.”

While getting Ellie home is a positive development for the family, mam Joanne said there is still a long road ahead.

“Ellie has a huge amount of recovery and physio ahead . . . and still has some numbness in her left leg which could be permanent,” Joanne said.

“She will also need spinal fusion in the future to support her spine as she grows.

“There is a long road ahead, and we’re taking it one day at a time.

“However, we still can’t believe the positive place we are at now. It’s such a good news story, getting her home.

“Ellie is taking it all in her stride. She’s amazing.

The family wished to thank everybody across the community and Ellie’s medical team for their support in recent weeks.