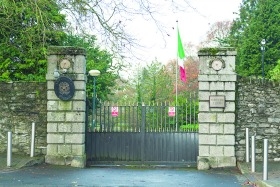 The Echo has learned that during the past few months rumours have been circulating amongst members of the community that due to financial concerns, the ambassador was considering

leaving Lucan House.
The rumour was further heightened after a motion was placed through the Lucan area committee meeting by Councillor Paul Gogarty, to ask the council to send the ambassador a letter.

The motion, (which was passed by local councillors) asked the Chief Executive of South Dublin County Council to write to the Italian Ambassador and/or consular officials requesting that “in the eventuality of Lucan House ever being vacated by the Italian State and put for up for sale or lease, that the Council should be given first option on the purchase or lease of Lucan House and its environs.”