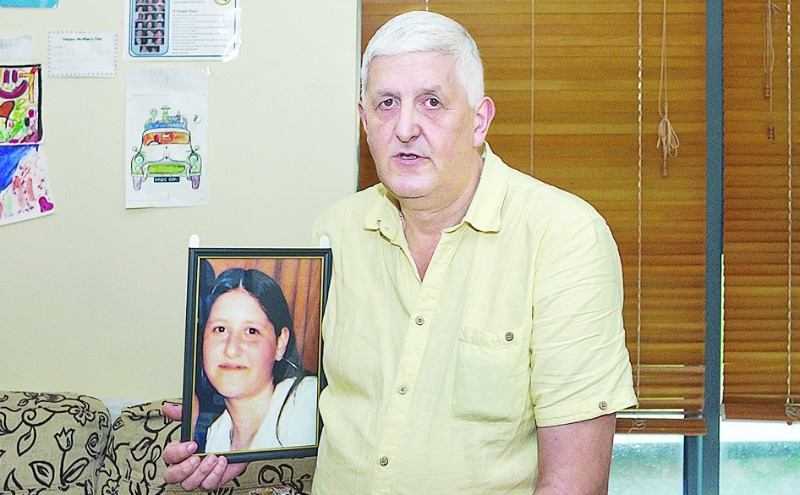 Judges ‘in a world of their own’ says grieving dad

THE heartbroken father of a young girl killed by a driver who spent 10 months behind bars, has blasted judges who are “afraid” to hand out appropriate sentences to repeat offenders.

A motion calling for the Minister for Justice to conduct a review into the sentencing for repeat impaired drivers, passed at South Dublin County Council this week.

Marsia Leighio (16) was killed while crossing a light-controlled junction with friends at Fonthill Road/Dunawley, Clondalkin in 2005.

The fifth-year student at Coláiste Bride, was hit at an estimated 80kph by Ciara McAlinden, from Dundalk, who had travelled to Clondalkin to get drugs.

The impact was so severe that Ms Leighio was lifted out of her runners and thrown the height of the traffic lights.

Subsequent court hearings heard McAlinden, a heroin addict, stopped 250 yards up the road but then sped off.

She had been convicted a year previously of drink driving and unlicenced driving.

“Judges are in a world of their own,” said Mr Lieghio.

“They’re afraid and the DPP are just as responsible, they want to just clear the books. Every Tom, Dick and Harry knows it’s wrong to drink and drive or text and drive, so why do these judges still accept excuses. There is no excuses and no deterrent.”

Minuscule sentences handed out to repeat criminal offenders, and drink driving advertisements, are a slap in the face for families, according to Mr Lieghio.

He continued: “It is very easy to show remorse in court. McAlinden showed remorse, but judges have no idea. Why can’t the powers that be punish severely. If you kill someone, it should be a life sentence.

“People say I’m crazy, but I feel a deal was done with authorities. The garda involved in the case encouraged us not to ask for an inquest.”

Leo, a Citywest resident, is campaigning to introduce new laws to review sentencing for repeat impaired drivers, which include an immediate ban for those caught drinking and driving, increased fines, confiscation of vehicles.

“If a driver is banned and then caught driving, the car should be confiscated,” he said.

“But then you have civil liberties groups saying his wife needs a lift to work, but it is his responsibility, not his wife. The name dangerous driving causing death needs to be changed to vehicular manslaughter.”

Mr Leighio is supported by Sinn Féin Councillor Mark Ward, who brought the motion to the Council chamber this week.

Cllr Ward said: “I have worked closely on this motion with Mr Lieghio. The review should include full consultation with the families bereaved and injured victims.

“In the aftermath of Marsia’s death, and during the judicial process, Mr Lieghio felt that his voice was not listened too. He would like to see advocates assisting and advising bereaved families pre, during and post the judicial procedure.”

Like Mr Lieghio, Ward also wants to see cases causing death and serious injuries to be heard in a Circuit Court rather than District Court, to allow judges to impose tougher sentences.

Cllr Ward continued: “One last point is the use of the word accident when dealing with collisions caused by impaired drivers.

In my numerous meetings with Leo I occasionally used the word accident – Leo rightly rebuked me.

“A definition of the word accident is an event that happens by chance or that is without apparent or deliberate cause. When someone decides that they are going to drive impaired they are fully informed of the possible consequences of their actions.”

Cllr Ward’s motions was fully supported by his fellow members in the chamber.

Cllr Mick Duff said it was “unforgiveable” in this day and age to drive impaired, whilst Cllr Paul Gogarty referred to a Google search on drink driving which brings up a first link for a solicitor advertising “80 per cent acquittal rates” as a reason to tighten the law, and labelled cases like this as “murder.”

Cllr Ed O’Brien, a solicitor, acknowledged “certain issues in relation to sentencing,” but stated “repeat offences should not be allowed.”

He cited loopholes such as last year, where a Romanian man took legal action on the basis that his breathalyser print-out should have been in Irish, as “not right” and said the judicial counsel should be part of any review.

Mr Leighio says he “wouldn’t be here today” without the support of his three other children Lia, Nathan and Joshua, and has vowed to keep the pressure on to change the law.