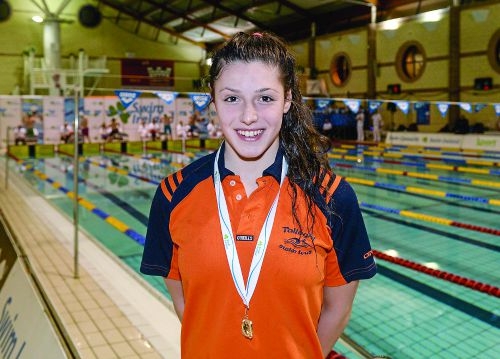 June Sports Sports Star and Sports Team of the Month

WHILE only 14 years old, Antoinette Neamt is still no stranger to The Echo Sports Awards.

The Tallaght Swim Club star has now received her third nomination for the annual prize- her latest coming after her stunning performance in last month’s European Youth Olympics in Tbilisi, Georgia where she scooped silver and bronze medals.

Indeed she finished runner-up in the 400m Freestyle, clocking a time of 4:16.61 that was not only a personal best, but was also inside the qualification time for the European Championships in London next year.

She had sparked huge hope of making the podium after she qualified fastest from the heats for this event.

Prior to that she bagged a bronze medal in the 800m Freestyle after finishing up in a time of 8:47.12- just .13 of a second behind silver medallist Petra Barocsai of Hungary.

More recently Neamt has been contesting the World Junior Swimming Championships in Singapore.

There she teamed up with Conor Ferguson, Rory McEvoy and Gabriella Weaver to set a new Mixed Irish Junior 400m Freestyle Relay Record of 3:42.35 to place 12th overall.

GRANGE Golf Club is represented in The Echo Sports Awards this year after their team raised the Pierce Purcell Shield pennant for the first time since 1976.

The Rathfarnham club took the final step on the road to the prize after they beat Royal Tara 3-2 in the decider staged in Portarlington.

Grange saw the last match go to the 19th but Brendan Lehane and John Nolan held their nerve to clinch victory and, with it, the prize for the club for the first time in 39 years.

Indeed the win brought a successful conclusion to a long campaign that started when they emerged one of two qualifiers from Foxrock.

That was followed up with a win over Killiney after which they beat Charlesland in Powercourt and then Kildara in Castlewarden.

This then set them up for a semi final against Hermitage GC which again saw the last match go to the 19th with Grange’s Brian Tuite and Darach Connelly prevailing.

“It’s been a long time since we’ve won something of this stature” pointed out a delighted Grange Team Manager Plunkett Walsh.

NEWER POSTDid you miss any of the biggest news from last week’s Echo? Right this way…
OLDER POSTGas cylinders discovered in the ashes of a blaze on green area in Tallaght