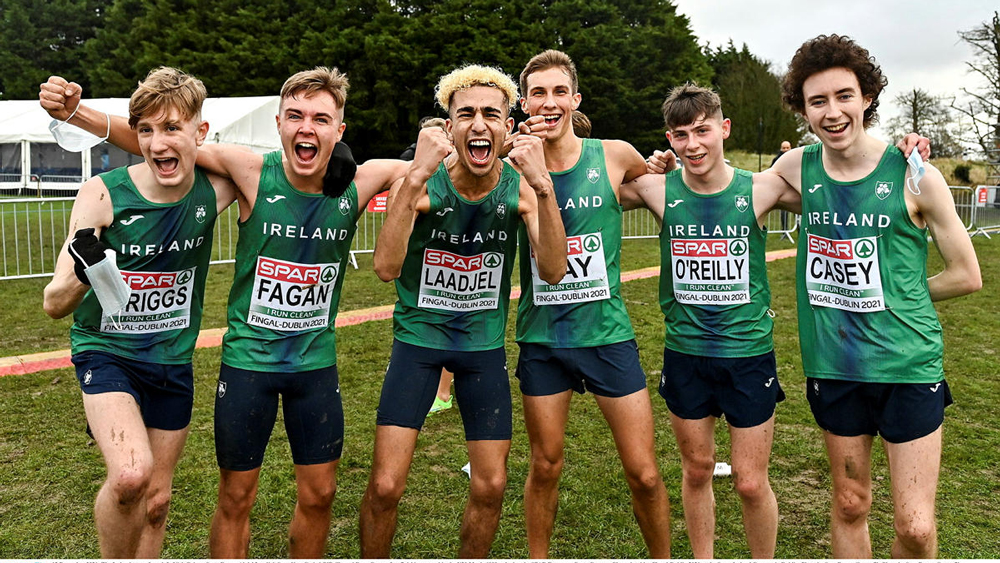 LUCAN lad Abdel Laadjel was delighted at the role he played in the Ireland Under 20 men’s team winning a tremendous silver medal at yesterday’s European Cross Country Championships at the Sport Ireland Campus.

The Donore Harriers star, who currently represents Providence University in the US, recovered from a somewhat difficult start to the race to eventually lead the Ireland team home in sixth place overall, subsequently playing a huge part in the squad making the podium.

“I wasn’t feeling great coming into the race, just from travelling. I just felt a bit tired and I’d say I just wasn’t comfortable at the start” explained Laadjel.

“I had a bit of stitch at about 500m when I was at the back, but I didn’t let that really affect me. I was just waiting for it to pass and start making moves again. And once I start picking runners off, I was feeling good.

“I knew that if everybody ran well on the team, we could get a medal and everybody did run well. It was great” he told The Echo.

Sitting in 32nd position after the opening 700m, Laadjel started to move steadily through the field up to 19th by the close of the first of four laps in the 6km contest.

By the halfway mark, the former Kishoge Community College student had improved to 11th, with compatriots Nick Griggs and Dean Casey in ninth and 10th respectively.

With three to score, the Irish trio were very much in contention for team gold at this point and they worked well together on Lap Three, reaching the bell with Laadjel in 12th, Casey 13th and Griggs just one place further back.

At the front of the field Axel Vang Christensen of Denmark had opened up a commanding lead that he extended to win in 17.53, with Abdullah Rabi (18.18) of Norway runner-up.

Entering the final strait, Laadjel was involved in a sprint for fifth place among five other athletes.

And he drew on his strength to cross the line in sixth in a time of 18.30 with Casey and Griggs following in 13th and 16th respectively, resulting in the Irish team finishing on 35 points, just one point behind winners Team GB and two ahead of Israel in third.

Delighted with the performance of the Donore athlete on the European stage, Laadjel’s former coach Gerry Naughton said “It’s very big for Donore Harriers. This is a new rising star for us and I’m delighted.

“He’s a lad I found in the West Leinster Cross Country back in January 2017 when he finished fourth. You were looking at him then thinking ‘if you’d put some miles in those legs, he would have won that race.’

“You could see the potential back then and he’s a great prospect for Irish athletics now.

“Yesterday was really the first time that his name came to the fore. He was the first home for Ireland and he stole the show. He really did” smiled Naughton.

Laadjel paid tribute to the impact Naughton has had on his career saying “He’s the reason I started running, and hopefully I’ve made him happy as a coach that I ran as well as I did yesterday and hopefully there’s more in the years to come.”