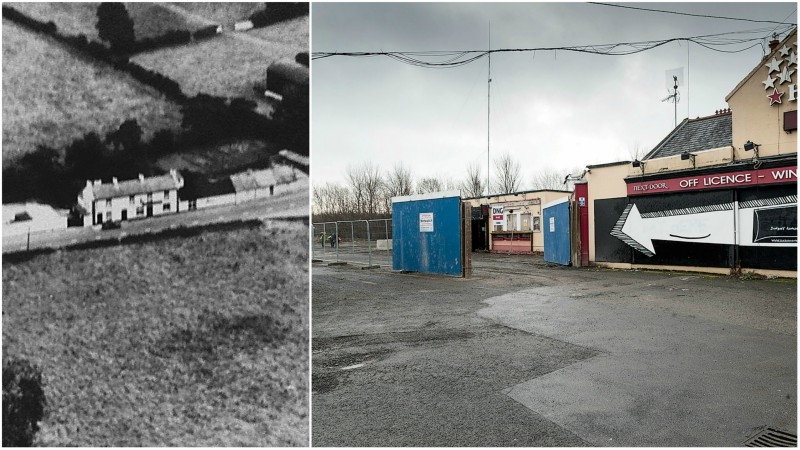 THE deal to buy the Cuckoo’s Nest has been sealed, with the new owners moving in this week and securing the site ahead of development in early 2018 – which could result in the landmark pub being completely levelled.

Following its closure in 2015, the Cuckoo’s Nest and its 4.5 acres of land went on the market earlier this year for a guide price of €4m – with the site being sold with planning permission for a 45-unit residential estate to the rear of the pub.

(L) The Cuckoo's Nest when the Lynch family took it over in 1962. (R) Builders moved onsite on Tuesday

The planning permission also provides for renovations to the pub itself and the demolition of Tallaght Theatre – which will be reconstructed in the north-west corner of the site.

However, The Echo has learned that the pub, which was bought by Phyllis and the late Peadar Lynch in the early sixties, could be totally demolished to pave the way for development.

Phyllis and Peader’s son Bernard told The Echo: “We are hoping to get into discussions with the new owner in the new year about a new pub on the site.

“The deal is done and the new owner has started securing the site, with the hopes of starting development in January.”

When asked about the future of the Cuckoo’s Nest, Bernard said: “Since the fire a year ago the pub has not been in good shape, I don’t know if the building is economically viable.”

He added that while it may be cheaper to renovate the existing pub, he is not sure if the original building will “survive” the new plans.

However, the family is hopeful that if the original building is levelled that a new pub and restaurant will be constructed on site, a commercial development which is provided for in the planning permission.

“We will have a discussion in the New Year and see what the builders are planning, and we’re hoping to be part of the plans,” Bernard said.

Amid all of the planned changes for the site, The Echo asked if the name would stay the same if a pub was to be redeveloped on site.

“Of course we’d call it the Cuckoo’s Nest, sure it’s a landmark,” Bernard said.

Bernard, who confirmed that the pub is not a protected structure, was unable to provide the name of the new owners to The Echo.