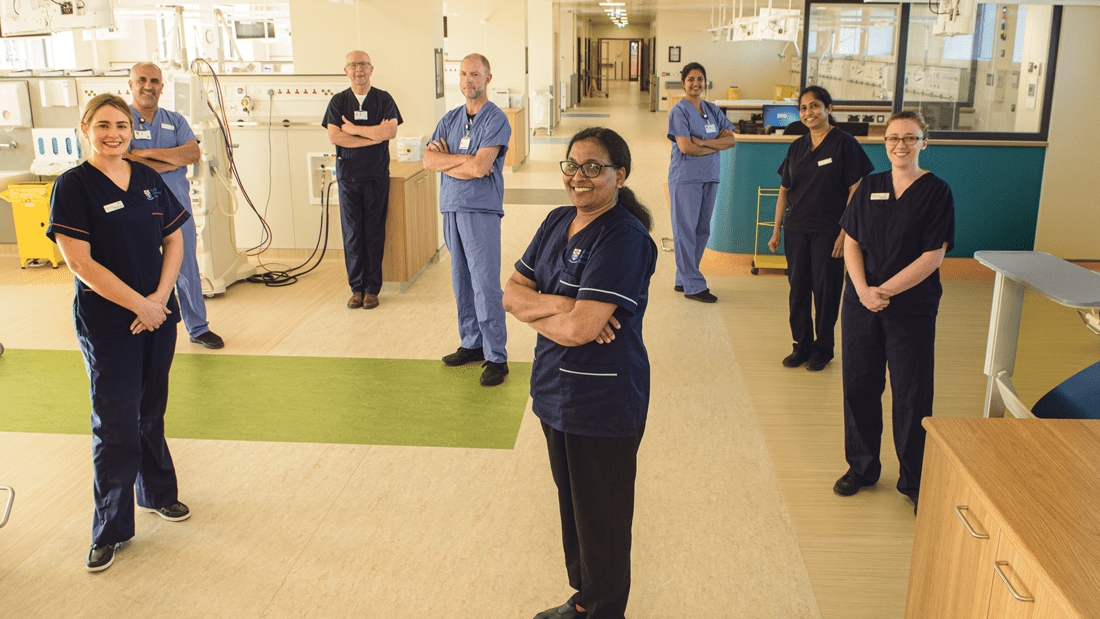 THE first sessions of dialysis have been delivered in the new state-of-the art renal unit in Tallaght University Hospital, a “landmark” day for patient care at the local health facility.

The opening of the new renal unit also comes at a time when, following the arrival of Covid-19, the number of dialysis patients nationally has increased by six per cent.

The second largest centre in the country for Haemodialysis management, Tallaght University Hospital (TUH) was operating out of a 12-bed renal unit.

However, this week saw the opening of the new Vartry Renal Unit on campus, a 2,700m2 unit built over two floors with 28 haemodialysis treatment bays and six single haemodialysis rooms for immunocompromised or acutely ill patients.

There are also 14 offices, which for the first time will bring all of the different medical and allied health care professionals involved in the care of renal patients together.

Annamma Samuel, CNM2 Home Therapies with Professor George Mellotte, Consultant Nephrologist & HSE National Nephrology Lead in the new reception area where patients will arrive when they attend for dialysis in the Vartry Renal Unit at TUH

Speaking on behalf of the Renal team at TUH, Professor George Mellotte Consultant Nephrologist and HSE National Clinical Lead in Nephrology, said: “This is a landmark day for the patient care in TUH and could not have come at a better time as Ireland has seen a three per cent increase in the number of patients requiring dialysis every year for the last 10 years.

“Following the arrival of Covid-19, there has been an increase in dialysis patient numbers nationally by six per cent.

“There are two reasons for this increase nationally.

The Vartry Renal Unit at TUH

“Tansplant activity was suspended during the height of the Covid crisis and has yet to return to previous activity levels.

“Also, one in three patients that end up in ICU as a result of Covid have kidney failure and require dialysis.

“Some don’t recover and end up on permanent dialysis, particularly those with pre-existing kidney disease.”

Despite the challenges of recent months, the dialysis service at TUH has continued throughout.

“Nobody has missed a dialysis session”, Prof Mellotte said.

“The staff worked very hard, working late in the evening and into the night to make sure no one missed their treatment.”

Prof Mellotte added: “I and the Renal Team are looking forward to caring for our patients in this new state-of-the-art facility.

“Our patients attend for dialysis three times a week for up to four hours at a time, some have attended for over 1,000 sessions.

“I have no doubt our patients receiving their life saving treatment in this brighter modern facility will be of great comfort to them.”

The new unit was named after the Vartry reservoir and river in Wicklow, where the water supply for the dialysis service is sourced.

According to TUH, the name also reflects the importance of water in the haemodialysis service, with each dialysis session requiring around 500 litres of raw water.

Initially the new unit will use around 10 million litres of water annually, a volume anticipated to double in the coming years as the number of dialysis sessions increase.

Once water arrives at TUH, it is processed through a dedicated Dialysis Water Treatment plant on the hospital campus.

According to Lucy Nugent, Chief Executive of TUH: “The hospital is grateful to all those who have supported us in this journey to get to where we are this week, delivering dialysis to our patients in an incredibly impressive state of the art facility.

“I have to acknowledge particular thanks to the incredible teamwork by our nursing, medical and facilities staff in getting the unit open at a time when the Hospital is particularly busy and continuing to provide dialysis treatment in the old renal unit.

“It has been a herculean task and is testament to the calibre of the team we have here at TUH, despite the challenges we have faced this year staff have remained focused and work together to prove the best possible care to the patients under our care.”

Funding for the building of the Unit was provided by the HSE and is one of the Government’s National Development Plan projects 2018-2027.

NEWER POSTTallaght Museum and Heritage Centre – A concept
OLDER POSTStories from the Frontline: You’re doing something that has a real and positive impact