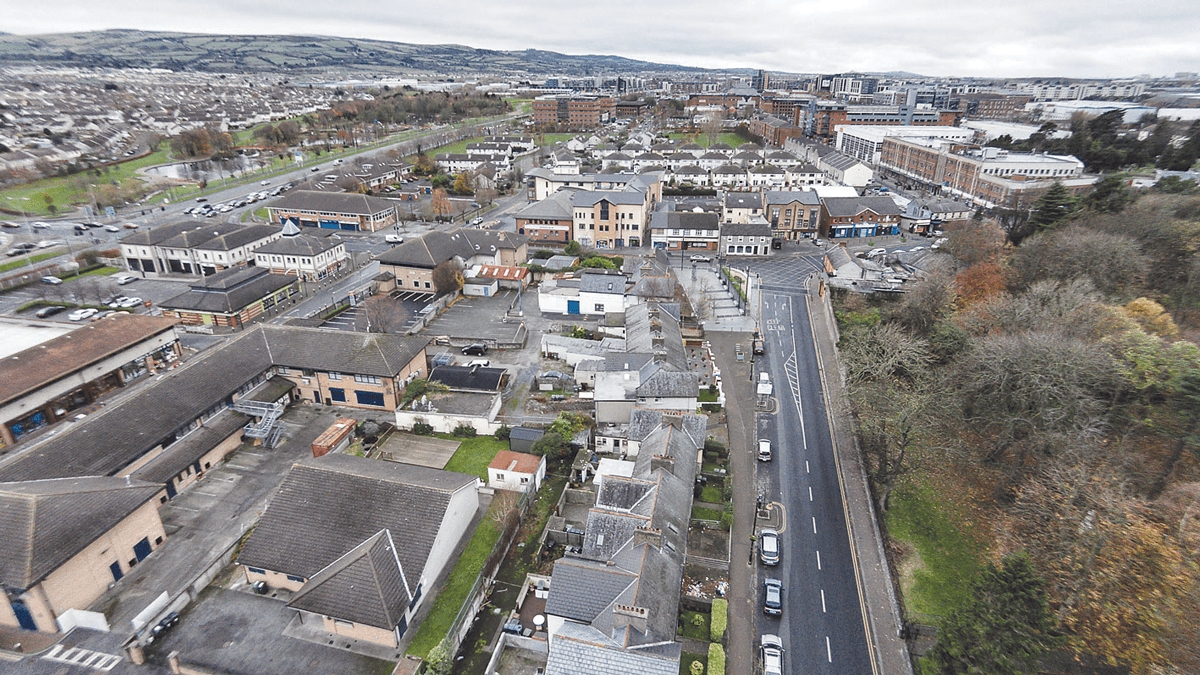 So, here is the idea and it’s not a new one. Tallaght is an ancient place and it needs and deserves a museum and heritage/interpretive centre, established as a prominent feature within its locale.

Ireland is a fifth of the way into the 21st Century and as we approach the end of 2020 and travel further into the continuing Decade of Centenaries and 100th Anniversary of the State, it should be remembered that Tallaght too has an extraordinary place in the long stratified history, cultural diversity, achievements, symbolism and narrative of this Island.

There are calls for a new heritage centre in Tallaght

Now, imagine visiting this heritage centre and looking down on the large 3D model of an area, let’s say central Tallaght, as it was in the 12th Century and you can pinpoint the monastic site, the Archbishop’s palace etc, the crossroads where the village approaches Oldbawn near the modern bypass next to Watergate and Sean Walsh Park.

The large model shows the approaches to and from the hills, the city, out towards Brittas, Saggart and Clondalkin, it shows representations of the hamlets, farms, plots, the rivers and other landmark features that would situate the visitor to where he/she lives today, goes to school, grew up etc. Imagine that 3D model working on the minds of children and younger generations starting a life here.

Models could be made for the townlands of Kilnamanagh, Kingswood, Jobstown, Oldbawn etc. Aerial photographs of the exact same locations and contextual information boards are displayed on nearby walls to tie it all together, maybe even audio with historical sequences and stories.

There is a real need for this sort of enterprise in our modern age because I think that sometimes people, through whatever struggles and periods of stress they endure, can lose their sense of belonging, their sense of ownership to where they are.

It is a strange dichotomy that the pandemic we are living through today is creating hardships for many but is bringing back to the fore the goodness and community spirit, the feelings of mutual understanding, identity and inquisitiveness.

This can all be built upon as a sense of shared place. I want future generations of my family to understand the rich legacies of where they come from as part of their origin story.

One of the problems, to my mind, is that many people in Tallaght and it’s surrounds and those that visit or grew up here but have moved on are not aware of the deep contextual narratives, great and small, that binds them and their identities to this place, this landscape.

They are not aware of this self-aware thing that has its own heartbeat and consciousness. I think Tallaght has always had these elements but many of us have unlearned the vibrations and pulse of the stories or maybe we just were never introduced to the magic and gifts these narratives can deliver, especially to a growing, new and enlightened populace.

They, the people, are the heartbeat, they always have been, all the way down through the centuries.

Whether a resident with long term familial connections to this place, this landscape or someone more recently arrived or even just visiting like a tourist might and should, no matter where you hail from, you can become part of Tallaght’s rich historical narrative and more importantly in can and should become part of you.

It is and can become a gift you take and keep with you for the rest of your days, an energy tying you to this place, you might just need to be reminded, shown how, through the interpretative and educational processes and wonders of a museum & heritage centre.

It will be a showcase of discovery. Tallaght needs to be discovered, and in the hearts of those who do this, especially children and younger people, it will be rediscovered like this again, and again and again. Imagination is the key.

An experience for the visitor, Imagine this, that the Tallaght Museum & Heritage Centre is already established and open to the public. The facility houses many historical artefacts pertaining to the history of Tallaght.

But equally as important is the fact that it is also a heritage and interpretative centre showcasing the rich narratives of Tallaght around stories for which there are few or no artefacts surviving like the ecclesiastical literature of all the monastic sites, the tales of Finn McCool and the Fianna (Glen Na Smole) using the Dinnseanchas or Irish place names lore and the oral traditions of this island that are imprinted on the landscapes, and the more modern writers and poets too.

There are narratives and history relating to warfare both modern and ancient, the Vikings and Normans, Tallaght’s Aerodrome 1917-22 and in later incarnation as a chocolate factory, the O’Tools and O’Nolan tribes raiding the townland and the religious and political high ground that Tallaght held down through the ages, indeed there are still extant features relating to the pale ditch in Kiltalown, and ramparts in St Maelruains’ still survive as do the medieval ruins and architecture in many places such as the tower in the modern priory.

There’s history relating to the Revolutions of 1798, 1867, 1916 and the War of Independence, Civil War, Defence Forces and UN Peacekeeping.

Tallaght has and is a very important place name =Tamhlacta (Plague Burial Place) synonymous with the burials on the surrounding hills and I remember being fascinated by the details of this when I was very young, I still am.

There are very many place names, boundaries and vanishing Big Houses and Estates in the area with stories attached to them that are at risk of being forgotten such as Bawn Villa on the Old Bawn Road and the stories of the famous literary family that lived there, the Furlongs.

There are also oral histories to be discovered for future generations and more that need to be recorded.

Tallaght has fascinating biodiversity, fauna and flora that can be studied and introduced to new generations and visitors, nature and historic trails that can still be discovered.

Tallaght is now an education hub with state-of-the-art library facilities, many schools and a university. People come here from far and near, they come from all over the world to learn, let us teach them about this place, let’s give them a gift, an experience of this place they will keep.

And as such the museum and heritage centre would itself become a repository of the thought and heartbeat of Tallaght’s identity and many forms of landscapes, welcoming new citizenry and its multicultural diversities.

The exhibitions, whether built around actual historical artefacts or interpretative constructs like digital copies and replicas, whether revolving themes or static long running showcased themes, will draw people to the centre and by that value it will draw people to Ireland and to Tallaght.

Imagine a hub and repository of excellence for education, archaeological and historical survey and research.

Over time a call out to the public should be made for artefacts (for identification, registration and documenting, and for future exhibition if possible, and in conjunction with relevant bodies such as Tallaght library).

So, there would be a requirement to construct a truthful fact-based narrative for Tallaght built on its story and the stories of the individual areas based on the individual and inclusive evolution of historical landscape(s).

So for example, the visitor enters a room and finds herself in the 5th Century monastery where a monk is working at the kiln, she might meet St Maelruain transcribing the Stowe Missal onto velum, or a Viking raiding party in the cloister. This could be achieved for any period. This way the experience for the visitor is the sight, sounds and the sense of place.

The exhibitions themes could revolve around the narratives of

Literature (Might go with Ecclesiastical history theme, early manuscripts all the way up to modern times with writers and traditions ie Kathryn Tynan, the Furlongs of Bawn Villa and others).

All the above would be based on the evolution of the landscape through historical narratives, storytelling (historiography) and artefacts and replication. For example it would be very important to show the hills, rivers, large features in the models ie Pale ditch, main routes of the periods in and out of Tallaght so as to pinpoint where artefacts belong in the historic landscape compared to the modern.

The displays could be hubbed by time periods together in chorological themes.

Several very large-scale built models of Tallaght would be required for this.

The models should be at least pool table size and three dimensional in construction and similar to those in Dublinia.

The first for example should be of central Tallaght in the monastic period to include all the monastery sites, or routes to them and marked in their locations as landmarks for viewers to locate themselves in the historic landscape. The facility should also use audio visual technology and costumed story tellers.

Other large-scale models of Tallaght would include

Soon we will be coming to a time of renewal. There is much to do on the road to achieving all this of course, but there is also a need to think big and to hold the course.

The Tallaght Museum and Heritage Centre would need to feel tactile to the user and it should be remembered that there are many extant pieces of our heritage held in other repositories such as the Stowe Missal that may never come back to us, even for a visit, until a properly run and responsible facility is established.

This enterprise of a heritage centre for Tallaght is now a formal objective of the Tallaght Town Centre Local Area Plan (TTCLAP) 2020.

If successful it would bring vast numbers of visitors for an experience of Tallaght, for example shopping and a visit to the heritage centre, or a full day’s entertainment with an overnight in one of the local hotels, this would be Tallaght’s and South Dublin’s commerce and economy benefiting from the energy of an expected and fulfilled experience. Employment creation and investment in the area would follow.

And for these reasons and many more a number of like-minded individuals in the community are coming together as a working group endeavouring to achieve this goal. It will require backing from many quarters including local government, South Dublin County Council, the heritage officer, local politicians, the chamber of commerce, the tourism board and other agencies and stakeholders, but it will require support from others too. Maybe you might join them.

Here’s a thought for you, what should we call it?