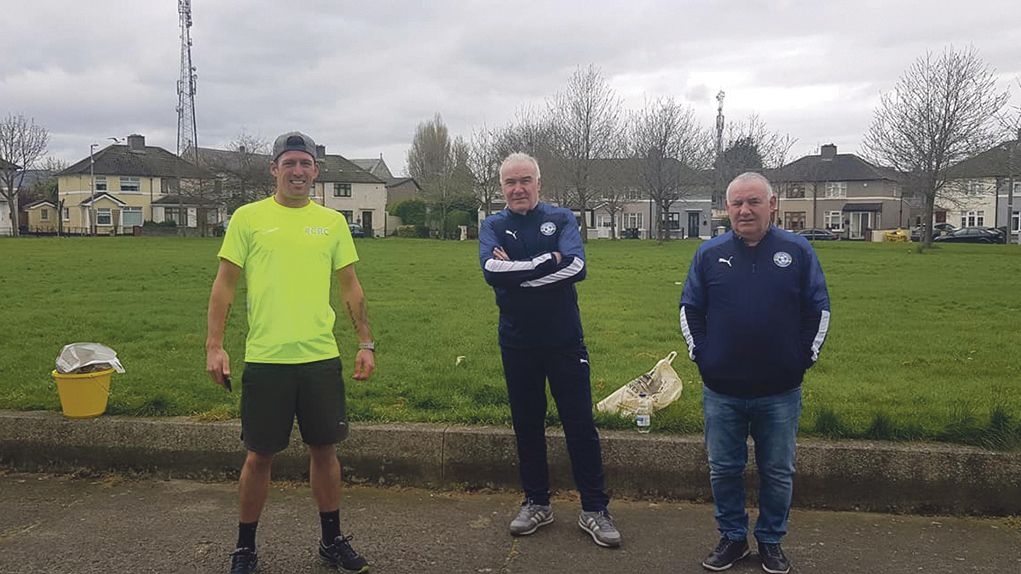 A MAN has raised €8,500 in aid of frontline workers in St James’s Hospital after taking on a challenge that saw him run 168 laps of his local field, which works out at 42.2km or the distance of a marathon.

Two years removed from surgery that saw Leon have 6 screws and a plate installed in his knee, Crumlin native Leon Johnson ran the full 42.2km around his local park with great success.

Leon Johnson supported by Martin Loughran during the fundraiser

“It was really just a spur of the moment thing, I didn’t train for it or anything,” he explained to The Echo after completing the challenge.

“The idea escalated from the Tuesday to the Saturday, when I started at 12 o’clock.

“It was a great day, and with the way it came together I really didn’t expect it would explode the way it did.

“We went live on social media throughout the day, Martin [Loughran] walked it with me and was very good help in the process of getting it going, four of them from Cherry Orchard Running Club ran it in a 2km distance, Fitnessfirst Frankie did it around Drimnagh and Old County supported the event.

“So there was a few of us that came together to try and raise as much as possible for the frontline staff in St James Hospital.”

“It was tough going but we got there in the end,” said Martin.

“I walked the 26km around the field but Leon was sorer than I would have been – it was his first marathon. He did well in fairness to him, he ran to whole 42.2km around the park.

“There were a few locals groups involved, it was a real community thing but it was Leon’s idea, it was his gig.

“The money was raised through GoFundMe and there was a bucket on the day that people driving by could throw money in as well.”

The money is being presented to frontline staff, who are working tirelessly during the coronavirus (Covid-19) pandemic, in St James’s Hospital this week.