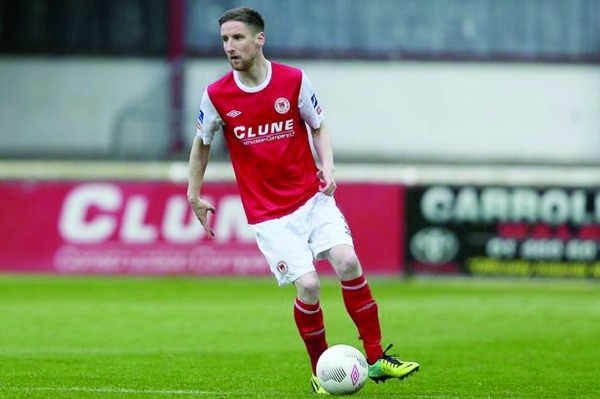 ST PATRICK’S Athletic defender Ian Bermingham believes his side’s recent loss to Bray Wanderers in the Leinster Senior Cup has served as a timely warning ahead of their 2016 Airtricity League curtain raiser against Galway United in Richmond Park tonight.

While the Inchicore outfit failed to really capitalise on their openings in this fixture, they were caught several times by a clinical Bray team that turned a 1-0 deficit into a 3-1 victory.

It was a disappointing result for Liam Buckley’s team given that they had shipped only one goal in their three previous friendlies while, themselves, notching up an impressive ten.

Yet Bermingham insists, the defeat was a useful reminder that they have to defend more effectively when they lose possession, something they have been working on in training.

“Last season we were caught too easily on the break and Bray, in fairness to them, took their chances when they came” Bermingham told The Echo.

“I suppose it was a blessing in disguise that it happened in that match and not when we started in the league, but since then we’ve been able to work on it.

“We’re fine when we have the ball, because we have the players who can pass it well around the pitch.
“It’s just when we lose the ball we have to be able to get back around it and not get caught so easily” he pointed out.

The St Pat’s defender has been very encouraged by the youth that has been introduced into the set-up at Richmond Park in the off season and believes that will pay dividends.

Indeed new talent like Graham Kelly and David Cawley bring a lot more athleticism to the side which is hoping to be really pushing for honours this year.

“We have a lot of youth in the side and have also brought in players like Keith Treacy and Billy Dennehy who have played at a high level” said Bermingham.

“We perhaps could do with a bit more experience like that in the team, but these young players have no pressure on them and can get around the pitch a lot more.

“They bring energy to the team and I think that’s what we were missing last season.

“It was disappointing the way everything finished up last season, but the new players we’ve brought in are a breath of fresh air and we’ve all really gelled” he insisted.

Looking ahead to their Premier Division opener at home to Galway, Bermingham added “Galway have signed well and I feel they’ll be stronger than last season.

“I suppose there will be that bit of pressure in that we’ll be expected to win, but we have the confidence in our ability to get the three points and get off to a good start.

“It’s the first game of the new season and we’re all really looking forward to it.

“Pre-season is all about getting the fitness levels up. There is that buzz about playing, having not played in a while, but the season really starts on Friday” he stressed.