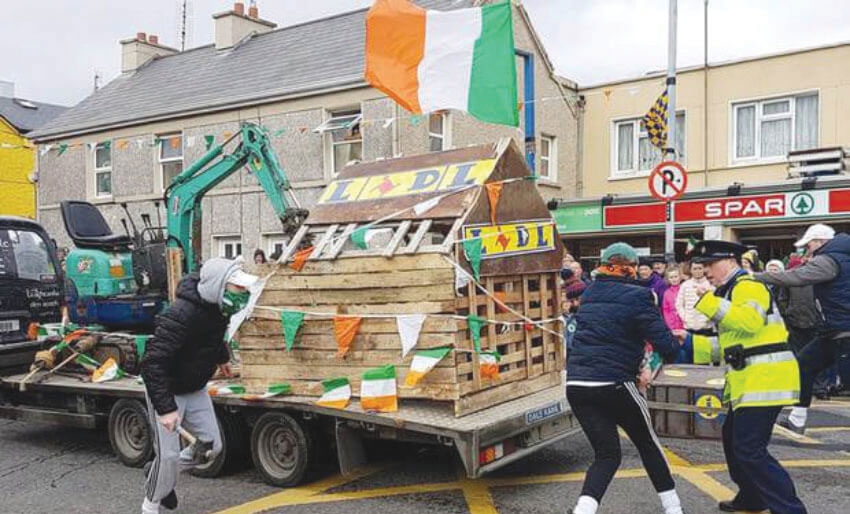 A LETTER will be sent to Mayo County Council and the organisers of the Shrule St Patrick’s Day Parade in relation to a float that depicted the demolition of a Lidl store with a ‘Tallaght Thugs’ banner, with local councillors expressing their “disgust and outrage”.

Similar floats were also featured in St Patrick’s Day Parades around the country, however it is understood that the float at the Shrule parade is the only one that had a ‘Tallaght Thugs’ banner.

One of the Lidl floats during St Patrick's Day celebrations

Part of the amended motion stated: “While we understand [the float] may have been done in jest at the Shrule St Patrick’s Day Parade, we would not want anyone to think this kind of behaviour is in any way acceptable to our community.”

The councillors also wanted to ensure that there would be “no ill will” between Shrule and Tallaght, by extending an open invitation to people from the Mayo town to visit South Dublin County, and also the opportunity for any visiting groups from the area to get a tour of the council building.

Cllr Dunne told The Echo: “The generalisation on one of the posters saying ‘The Tallaght Thugs’ adds to the stigmatisation of people in the area and the negative press we get in Tallaght.

“We’re looking for a written apology from the parade’s organisers.”

South Dublin County Council will notify the elected representatives when the letter is sent, and also if a response is received.