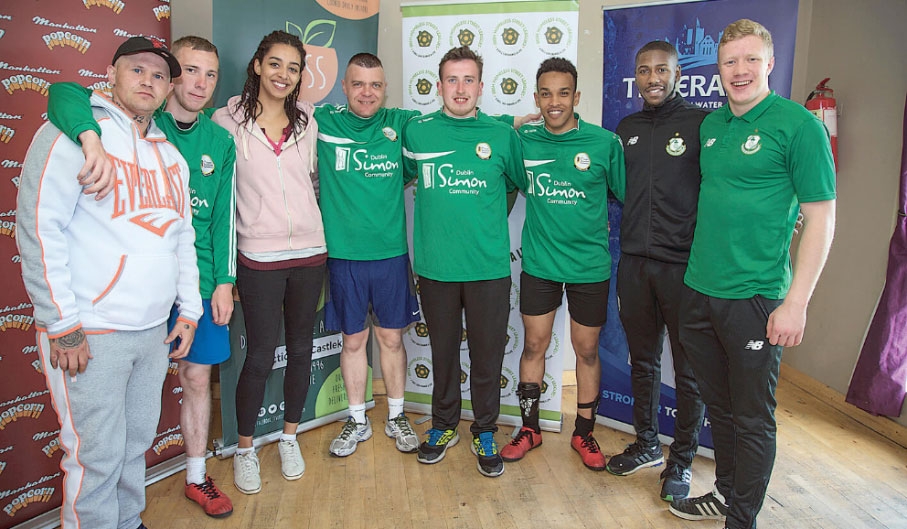 FORMER Republic of Ireland football star Damien Duff was on hand to lend support to the annual All-Ireland Homeless Street Soccer finals, at the Postal Club in Tallaght recently.

Up to 24 male and female teams from throughout the country took part in a tournament, which is used as a trial to pick Irish teams for this year’s Homeless World Cup in Mexico.

Irish coach and former Blackburn and St Patrick’s Athletic midfielder Thomas Morgan, used the occasion to monitor players and select a panel of players to represent Ireland at the Mexico tournament in November.

He did this using “sport as a catalyst to change lives” and to provide a positive support structure for people battling back from serious issues such as drugs and homelessness.

Under Clondalkin native Morgan and the coaching group, the Irish team have enjoyed an unprecedented period of success at the last number of tournaments, often finishing in the top 10.

This is achieved in trying circumstances, with Kavanagh acknowledging how difficult it is to obtain financial support.

“It is hard to get a corporate sponsor on board, and it is going to be expensive to bring teams to Mexico. People have supported us in other ways but if we could even just get one benefactor, it would allow us to prepare as best we can.

“Damien (Duff) was here earlier on and was out on the pitch playing with some of the lads. He still has it and scored a couple of goals!”