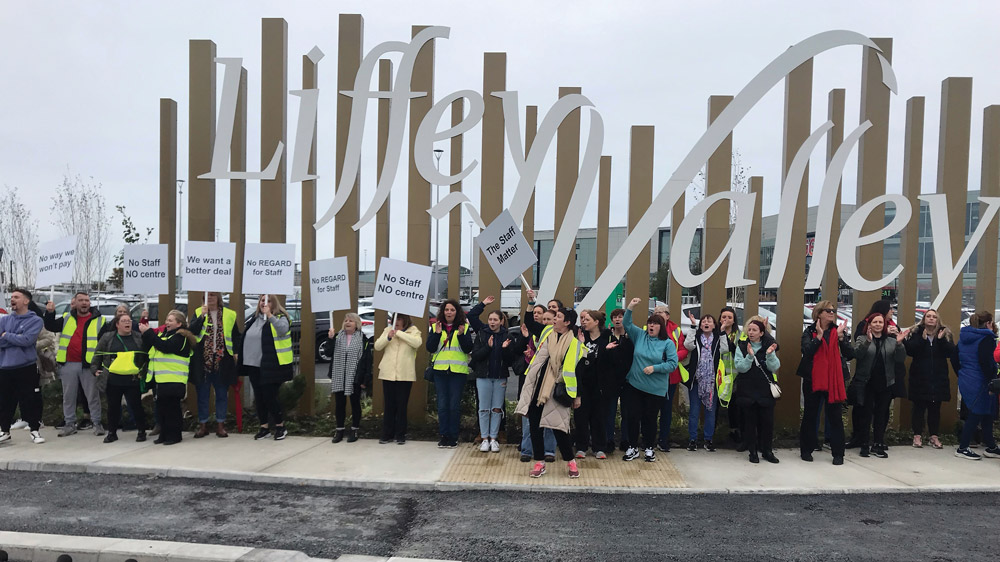 Liffey Valley parking charges have ‘nothing to do with us’

DISCUSSIONS on the new parking charges at Liffey Valley Shopping Centre were brought to an abrupt halt at the South Dublin County Council meeting on Monday, when chief executive Daniel McLoughlin stated “it is nothing to do with this chamber” and a matter for employers and employees.

Councillors sought clarification from the chief executive with regard to the parking charges, which have led to weekly protests by retail staff at the centre.

Introduced last month, staff at Liffey Valley now have to pay a daily rate of €2.50 in a designated car park, which works out at approximately €600 per year for full-time workers.

If they can’t find a place in the designated car-park, parking elsewhere could see them pay €12.50 to €15 for the day.

The controversial topic was raised by numerous councillors at the meeting.

Cllr Paul Gogarty (Ind) said correspondence circulated to elected members on Monday, inaccurately implying the parking charges in Liffey Valley were in some ways due to an action by the council, and requested clarification from the chief executive.

Cllr William Carey (SF) asked if it was right to be introducing parking charges in Liffey Valley with “insufficient bus services.”

Cllr Ed O’Brien (FF) said it is a matter between the employer and the employees.

Cllr Pamela Kearns (Lab) asked it they were “arguing over something we have no control over.”

Addressing members, SDCC chief executive Daniel McLoughlin, said: “How employers engage with their staff in parking, availability of charging, or whatever, is nothing to do with this chamber, or with me.

“There are hundreds of the 7,000 business in the county that have substantial parking, and have or have not charges, stipulated or non-stipulated, in their planning conditions. I’ve never heard it discussed in here before. It is nothing to do with us, nothing whatsoever.”