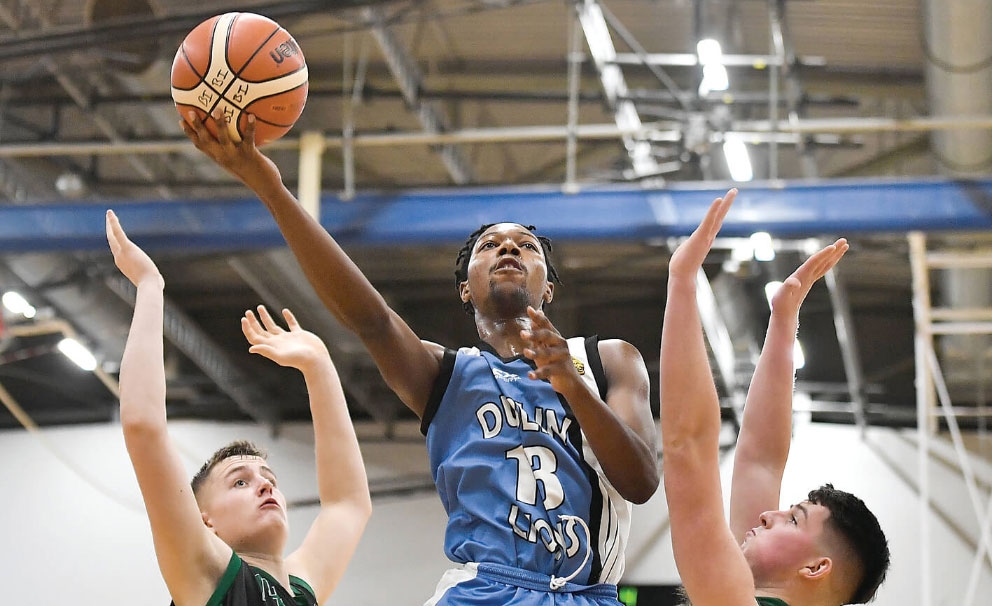 DUBLIN Lions Basketball Club has made a National Cup decider for the first time after their Under 20 men beat Portlaoise Panthers in Saturday’s semi final in the Mardyke Arena in Cork.

The victory came just the day before the club’s Under 18 Men’s team, which featured many of the same players from the Under 20 outfit, were beaten 74-56 in their respective last four fixture by the highly-decorated Moycullen.

In an Under 20 game that saw very little between the two sides for much of the tie, it was the Lions who edge into a two-point advantage by the close of the first quarter, Tiernan Howe and Jack Maguire planting some nice baskets.

James Phelan, Trevor Swayne and James Gormley kept Portlaoise well in it, but Lions began to carve out some breathing room by the halftime break as Neil Kavanagh, Oisin Rice and Samuel Mohamed all got on the scoresheet to help propel them 45-36 ahead.

Yet, Portlaoise began to work their way back in the second half as Lions coach Rob White explained: “We were up by about 10 points at halftime, but they changed their defence and that threw us off a little.

“They slowed the game down dramatically and we just weren’t making our shots. We were hurting ourselves more than they were hurting us.

“I think we under-preformed, but I suppose the lads showed good character to be able to come through it and reach the final,” he told The Echo.

Indeed, midway through the final quarter, Portlaoise had squared the match, but Lions demonstrated great resolve to take off again when it mattered.

Howe and Mohamed both really stepped up to the plate, with the latter serving up some timely scores to see them over the line.

“Samuel was superb for us and had that real calming factor,” said White.

“In the third quarter when we just weren’t scoring, he hit two big baskets for us and, with about 40 seconds to go when there was just two points between the teams, he made a huge basket that completed the job,” he added.

Rian Caverly also played his part with some big blocks before taking a charge from Gormley that saw the Portlaoise star player fouled out with some four minutes remaining.

The victory sets the team up for a big National Cup title match at the end of the month against a Neptune side who beat Templeogue 100-65 in their respective semi final fixture.

“It is going to be tough,” admitted White. “Neptune beat Templeogue and Templeogue are a good team, but we’ll give it a good go.

“I do think we under achieved in both [Under 20 and Under 18] games. We weren’t making our shots and we didn’t show what we’re capable of,” he said.

The demands of the Portlaoise game appeared to take its toll on the Lions Under 18 team, which included many of the same players for their Hula Hoops National Cup semi final against Moycullen.

Up by three points at the end of the first quarter, Moycullen managed to enlarge the gap to eight by the halftime break thanks in no small measure to the efforts of Paul Kelly.

Matters grew worse for Lions in the third as they fell 15 points adrift but timely scores by Howe and Jack Maguire brought it back to nine heading into the final period.

Yet, the Clondalkin side was unable to build on that surge despite the best efforts of Howe, as James Connaire helped push his side out of reach.

“Moycullen are a good team,” said Coach White. “They’ve won all the major competitions at Under 14, 16 and 17 level.

“We played them last season in the National Billy Kelly tournament and lost by 14. We had made a number of transfers and I thought we were a lot stronger this year.

“I don’t think we achieved what we’re capable of, but, credit to Moycullen, they made us under-achieve.

“Not to make excuses, but playing on Saturday hurt us. A lot of the players play on both teams and the game on Saturday took a lot out of them. It was our first ever experience of the National Cup semis and then we had two of them one after another,” he pointed out.