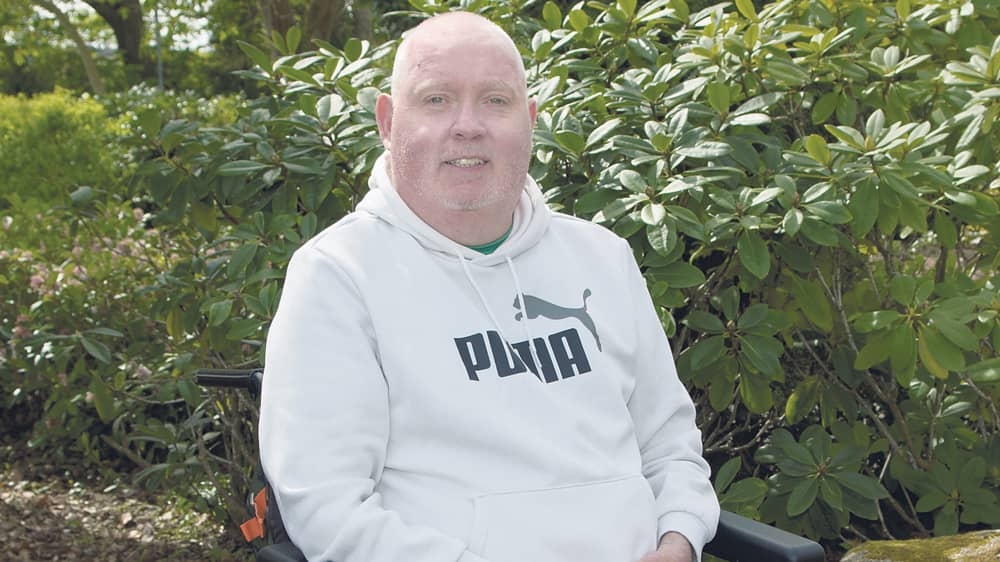 “I was conscious the whole time, I could hear the conversations around me, I could feel absolutely everything but I couldn’t move,” beloved community Garda Frank Howe recounting the agonising months he spent in hospital after being diagnosed with Guillain-Barré syndrome (GBS).

Christmas 2017, Howe was out on patrol on the bicycle, as he was synonymous for, when he got a call that there was a group of youths hanging out around Citywest Hotel.

Not thinking too much of it, but deciding to zip down as a precaution, Howe meandered his way around patches of ice as he pedalled towards the area.

“It was very frosty, I was aware of the fact that there was a bit of black ice but I was getting through it alright,” Howe tells The Echo.

“I arrived at the carpark and went up and over through a gap in the hedgerow.

“As I landed on the other side of it, I hit this massive patch of ice and the bike was like the matrix under me, going every direction.

“I lost control of the bike, and came down and hit my head.”

Shaken, Howe jumped back up and carried on.

On St Stephen’s Day, the Lucan resident woke up with a slight head cold and after a few hours pottering about, he collapsed.

The next day, as he sat up on the side of the bed to get ready to go to the GP, Frank realised that he had lost the ability to move his hands and feet.

Within hours, the Kerry native was completely paralysed in Connolly Hospital’s Intensive Care Unit after being rushed in by ambulance.

“It was very frightening for my wife, she was basically told to clear the decks, that there’s a chance I won’t make it through the night,” says Frank.

“My lungs collapsed then when I was in ICU and after a period of time I was diagnosed with GBS, it’s like locked-in syndrome.

“The only thing I could move was my eyes.

“I was on a ventilator, machine assisted breathing, getting my food and water through a tube and drip.”

Frank then, still unable to talk and bed-stricken, started to undergo treatment in the National Rehabilitation Hospital in Dun Laoghaire.

“I’ll never forget the pain of moving, if you put a blanket over my feet, it was like someone putting concrete blocks on me.

“They’d move my arms and put them next to me, and if my thumbs were pointing in towards me, tipping off my sides, it was like two needles stabbing me.

“I was in excruciating pain all of the time, it really was horrendously frightening.”

Those days, locked inside his own body and unable to communicate are thankfully in the rear view mirror for Frank.

Wheelchair bound, the disease has begun to reverse itself and all that he’s waiting to do is stand up, maintain his balance and take a few steps.

The 52-year-old does admit that there’s a while to go yet before he’s at that stage – with learning to walk again on the horizon – although he is rearing to go and itching to wave goodbye to his wheelchair.

Originally from Killarney in Kerry, Frank grew up in train station house in the town.

His father Francis became the youngest station master in the country when he took the job and moved the family into the station house.

“Everyone who would visit us couldn’t understand how we slept through the noise of the trains coming through the station,” he recalls, during an over the phone interview with The Echo.

“But that was normal for us. Santa even came for us on Christmas Eve on the 7.10pm mail train.

“It was special thinking about it. Kids dream of playing with trains, we had them in our backyard.

“It was a fantastic childhood.”

The second youngest of seven children, Frank’s family were very well accomplished in sports with his brother Michael – who is now a priest in Chile – captaining the Kerry minor footballers and sisters taking a particular shine to swimming.

As for Frank, he took to soccer and represented the county in the 1986 Munster League.

He spent a few years doing odd jobs around the town in his teens, and one afternoon, in 1991, he arrived home to find that his mother had filled out an application form for him to join An Garda Síochána

And so, Frank put his signature to it and went away to Templemore to begin his training.

He was first assigned to Bridewell Garda Station, where he spent 12 years working in the Drug Squad in Dublin’s inner-city.

After entering community policing, Frank’s first beat was in Dorset Street flats and he immediately found his calling.

“They were absolutely fantastic people, they had their troubles but they were brilliant,” he says.

“I would play football with them up in the flats, bring the kids off to the zoo, out to the seaside, we set up a creche and I really got to know the kids from when they were born all the way up into their teens.

“To be accepted in amongst the people in Dorset Street, as a fella from Kerry, was huge for me.

“But then time started to catch up with me.”

Seeking to settle down, after purchasing a house in Lucan in 1995 and moving into it in 1997, Frank requested a transfer out of the city.

His son Oisin was born in 1999 and in 2004, he spent a short period of time in Clondalkin Garda Station before being deployed to Rathcoole.

“The community council were crying out for a community policeman up there,” says Frank.

“The first day up there, the Sergeant John Lambert asked me to hop into the car and we drove up the main street.

“We turned off a side street and went up to Slade [Valley].

“There was all of these hills and mountains, open air, trees, space between the houses.

“It was a far cry from the concrete jungle I was in, in town – I felt like I was back home in Kerry.”

After getting the four districts beat, Frank became a very popular character in the community, giving talks to school children and liaising with different groups over the years.

Frank is hoping to step back into his Garda duties and sees himself, one day, out in front of the Four Districts St Patrick’s Day Parade – this time without the wheelchair.

“Sitting in St Mary’s Gaelic football club, myself and Sharon Greene made a deal,” Frank begins to explain.

“She looks after the St Patrick’s Day parade up there and she has been contemplating retiring.

“A few years ago I was made the grand marshal for the parade, my God it was such an honour, but we made a deal that neither of us would retire until we both walk at the front of the parade, in full uniform together.

NEWER POSTNature on our doorsteps: Horse Chestnut ‘Candles’
OLDER POSTDelay ‘Is a total disregard for survivors’