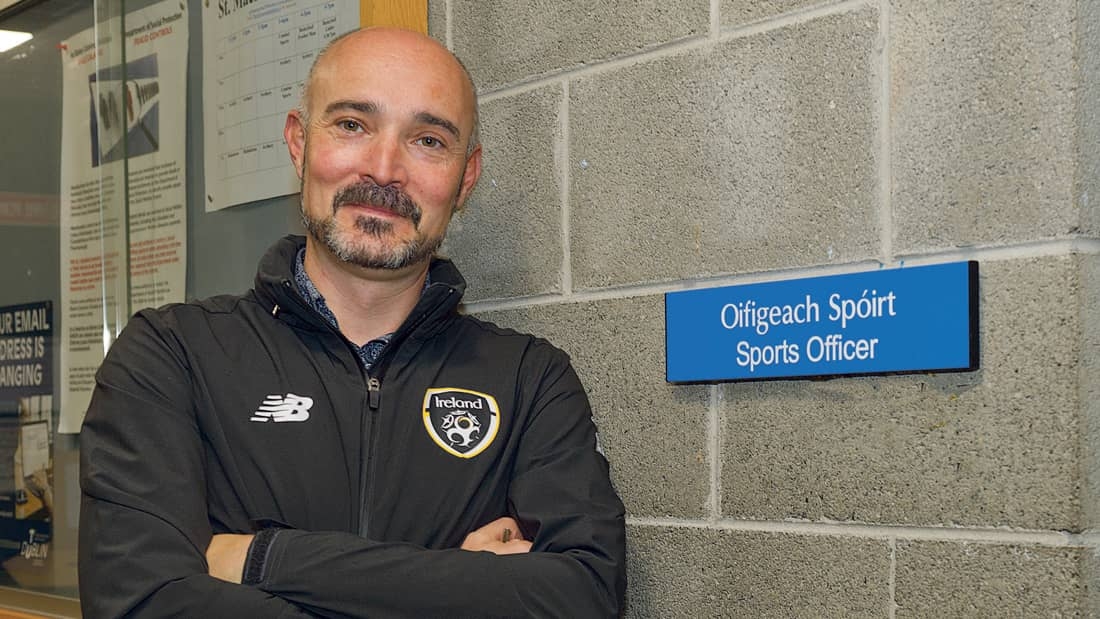 Taking up athletics as a schoolboy in a bid to to manage his childhood asthma led Tim O’Connor to develop a career as the sports and recreation officer in TUDublin-Tallaght, a role which he has been in for over two decades, and ignited an enduring passion for sport.

The Limerick man took up athletics and rugby when he was in primary school, as a doctor advised his parents this could alleviate some of his symptoms of childhood asthma.

The asthma symptoms diminished, and Tim started to excel at the sporting activities that he had undertaken – including winning the All- Ireland U15s title for the long jump in 1992, and playing for his local rugby club, Richmond RFC.

While attending a secondary school with a strong rugby tradition, Tim realised that his passion lay in athletics coaching and, after resitting the Leaving Cert in order to get the required points, he started studying for a degree in recreation and leisure in the Waterford Institute of Technology in 1995.

“I wanted to do something in sport,” Tim (43) told The Echo, “and at the time WIT was the only place that had something like that.

“There was only one college that had a sports science degree, but the points were really high for that, and it was the same for PE courses – for

some of those you needed 500 points, and I knew I wasn’t going to get that.”

But Tim thoroughly enjoyed his time in WIT, where he got to coach the college’s athletics team, and in July 2000 he was hired by the then- named IT Tallaght to become the college’s sports and recreation officer, and has been committed to the role ever since.

“I started in IT Tallaght in July 2000 and shortly afterwards went to the World University Games with Team Ireland as an assistant athletics coach,” explained Tim.

His time spent as a student in WIT informed Tim’s work in IT Tallaght, as he had worked in nearly every role in his alma mater’s athletics team and it equipped him with the skills to understand the inner-workings of college societies, and the importance of recreational activities at third-level.

“We empower the students,” added Tim. “We try to ensure that all of the clubs and societies have a democratically elected committee, which was something that I learned while I was in WIT.

“In TUDublin-Tallaght, we work together to make sure that the students get a holistic education – the college isn’t a degree factory.

“We want to develop more attributes for the students so that when they graduate, they’ll be more employable.”

When Tim first took on the role, he was dismayed by the fact that sports teams from universities seemed to look down on and underestimate IT Tallaght’s teams, and he tackled this within weeks of starting the role.

“Shortly after I started a group of students from the college’s GAA team came to me, and they said they had a good team, but they had to play a match for the Trench Cup Quarter Final in January, but it was during their exams.

“I couldn’t help thinking that if one of the bigger colleges were having their exams at the same time, they wouldn’t be expected to play that match.

“I thought, ‘Here’s a small college in Tallaght being punched around, and that’s not going to happen anymore’.”

The match was rescheduled, and Tim reached out to his counterparts in universities and ITs around the country to introduce himself and to encourage more interconnectivity between the institutions.

“I felt like there was a bit of snobbery between ITs and universities,” remembered Tim. “So I sent out letters to the directors of sport in the universities, saying I wanted us all to be on a level playing field, and it got a great response.

“Within two or three years we merged two different sports associations, one for universities and one for RTCs (Regional Technical Colleges] into one.”

Another key merger took place in January 2019, when the campuses of IT Tallaght, IT Blanchardstown and DIT all merged into Technological University Dublin (TUD), while still maintaining their own individual campuses – and this has also had a positive impact on the Tallaght campus’s teams.

“We want to create a TUD culture, no matter which campus you’re from,” explained Tim.

“We want to come up with combined teams for all the European championships, but domestically the teams will place for their own campuses.”

A combined team of TUD students will be going to the European University Championships in Belgarde next year, to compete in badminton and combat sport, while work has begun on a €14.7m sports facility on the Tallaght campus.

“I like to bring together a group of students and develop them to be something greater than the sum of their parts,” added Tim, “and show them what they can ork and working together.”