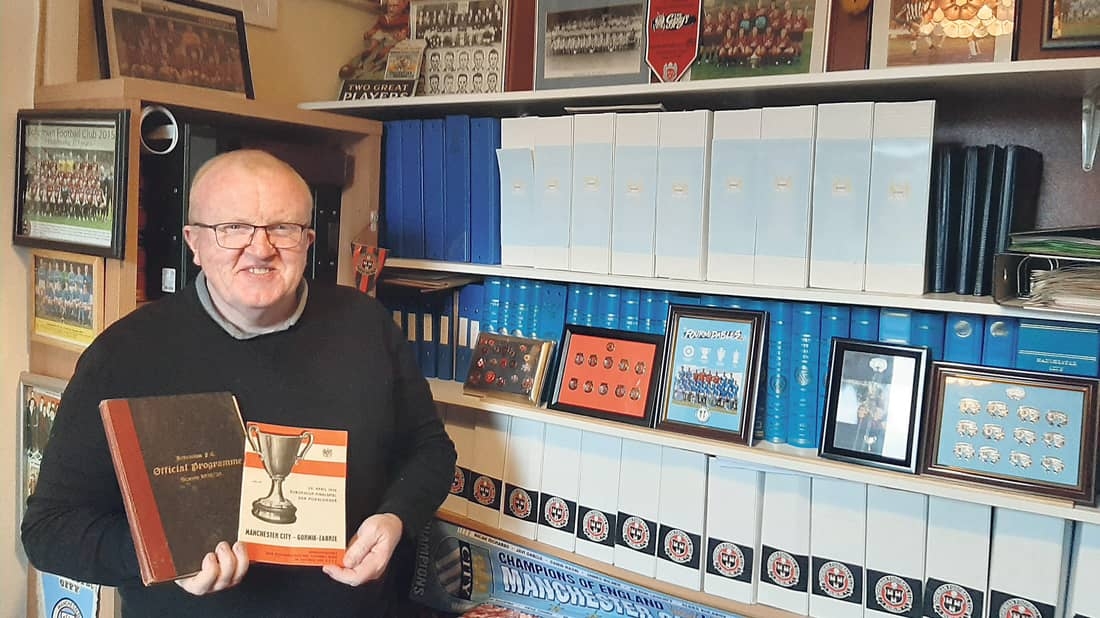 The Collectors: Breathtaking collection of football memorabilia going back to 1926

THE front room of Patrick Murray’s Mount Brown home is essentially a shrine to a life’s work collecting football programmes and badges related to games involving his beloved Bohemians FC and Manchester City.

Patrick with his extensive collection of programmes

Murray (60) got his hands on his first programme for a Bohs match as a 12-year-old kid in 1972, igniting the beginning of a journey that numbers at least 5,000 programmes today.

The collection does not include further copies that lie in the attic of his Dublin 8 home, or items he sold at markets and fairs over the years.

Each season Bohs and City have played in their club history is catalogued in dated yearly individual folders (i.e 1952/52 or 2006/07) containing match programmes.

“At this stage, it is a lifelong hobby. I can never see myself stopping, I might stop a certain category but I will still do it in some form,” he said.

“I started with Bohs and City who wore the same jerseys in their away strip, black and red, that’s what got me into it. My Dad used to work in CIE, the lads all had free travel on boat, or with Irish Rail, and would go over (to England) and bring me back a programme.”

Many of the pieces in Patrick’s library are works of art. Realistically, it would take days to fully examine and appreciate the craftsmanship and historical context thriving amongst this collection.

A season ticket holder with Bohemians and a regular at Man City games, whether that is home, away or in Europe, the football mad fan has racked up the miles for his collection.

Official programme from the international match between Ireland and Germany in Dalymount Park on Saturday October 17, 1936

“It depends on Ryanair, but I would get in about 20/25 City games a season, a few away games and Euro trips,” said Murray, a taxi driver.

To supplement the collection, he also attends programme fairs and markets, developing friendships with a network of fellow collectors over the years, who work together to source rare finds and missing pieces.

Ads appeared in the Bohs 1938 programme

“It is like a jigsaw, you are waiting for the next piece to come in. Four of us worked out that we had every Bohs programme, but then at Whyte’s auction on Molesworth Street, there was a 1901 programme Bohs v Preston that went for €1,400.

A builder found it under the floorboards of a house he was working on.”

Patrick looking through some of his colletion

Incredibly, Murray reckons he is only missing five match programmes from Irish football internationals, dating all the way back to 1929.

His collection includes the historic 1936 fixture between the Irish Free State and Nazi Germany in Dalymount Park.

A sign of the times is that the Man City league match versus Leicester on September 27, this year, was the first time Murray has been unable to source a match programme, because one doesn’t exist.

Above the official programme for Bohemians v Sligo in 1938

“City are currently doing E- Programmes, but I am not interested,” he said.

“It is probably a dying format. Younger people now can just get everything on their phone, even match programmes. They don’t feel the need to buy a real one.

“I have made a lot of friends through collecting programmes, up North and abroad. Say Bohs are in Europe, lads will get in touch. Fellas have different categories. Some collect cup finals, others Irish teams in Europe, or international matches.

Some lads have made a career out of it. If you get into this at ge, it is hard to get out of.”