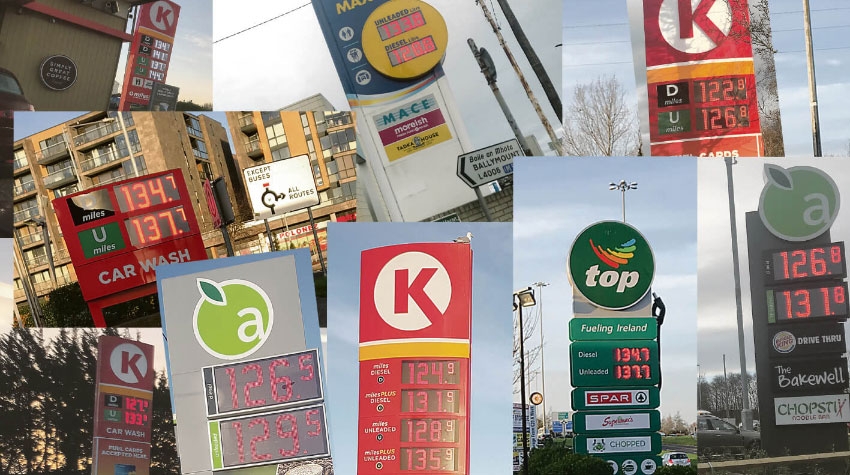 MOTORISTS received some positive news last week, as the AA’s monthly fuel prices survey found that the average cost of a litre of petrol currently sits at 132.9c – the lowest level since August 2017.

Diesel currently costing an average of 127.9c per litre, was the lowest price recorded by the AA since April of last year.

The AA’s monthly fuel prices survey found that the average cost of a litre of petrol currently sits at 132.9c

The AA said a drop in crude oil prices was the main driver behind the drop in fuel costs.

On the back of an Echo survey of pump prices around the county, a number of select service stations had reduced or maintained their prices below the national average.

This good value was followed closely by two pumps in Kylemore.

This was in stark contrast to the Top service station at the Spawell, also the exact same price this week at 137.7c for petrol and 134.7c for diesel, well above the national average.

The cheapest pumps in Clondalkin at the Applegreen on Monastery Road, were slightly up this week at 130.5c and 127.5c, compared to last week’s price of 129.5c and 126.5c, but still below the national average.

“2018 felt like a year of unrelenting surges when it came to pump prices, so it’s certainly reassuring for motorists to see prices trending in the opposite direction to start the New Year,” said Conor Faughnan, AA Director of Consumer Affairs stated.

“However, it’s important to remember that we are not seeing this drop as the result of an act of kindness from government or an easing of taxes, but as a result of international factors which are always vulnerable to reversing in the opposite direction at any instance.

“As with any purchase, the most important thing for those who are trying to cut costs at this time of year is to shop around when buying petrol or diesel. Simply put, it’s always better to be loyal to your own pocket instead of being loyal to any particular garage.”

Currently, the AA estimates that 64.42 per cent of the cost of each litre of petrol sold in Ireland is made up of various taxes.