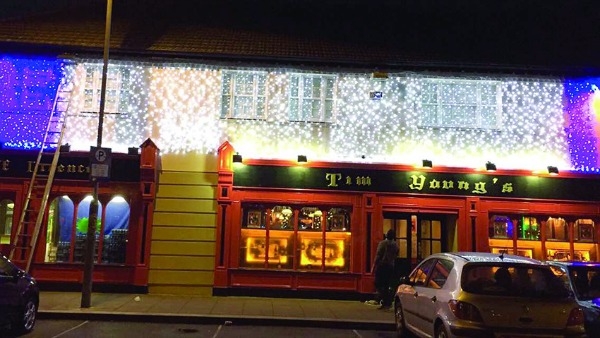 SPENDING up to €5,000 on Christmas lights was a no-brainer for one local business owner – who feels Dublin City Council have done little to create a bit of festive cheer in the community.

Maurice Mitton, proprietor of Downeys and Tim Young’s pubs in Ballyfermot, invested the money to create a feel-good factor in Grange Cross.

Mr Mitton said: “The place has gone down and it needed a lift, so we put the lights up outside. It has got a great response from the public – people are saying how much they like it.”

Staff spent three days putting up the lights last week, and Mitton hopes this will inspire other businesses to decorate their own premises in the years ahead.

“If everyone had lights outside their premises, it would be a place everyone would want to go,” said Alexander, Maurice’s son and manager in Tim Young’s.

The insides of both pubs are decked out beautifully with Christmas decorations, illuminating but subtle at the same time.

Mitton has operated Downeys since 1978, took over Tim Young’s in 1995 and “never has any trouble in them.”

“If you treat people nice, they treat the place well,” said Maurice.

He takes great pride in retaining his staff and “they in turn take great pride in how they run their local.”
Sean McGarry started working in Downeys as a lounge boy in 1978 and is now the manager of the popular bar and lounge.

“When I started you had the men in their 30s and 40s, still young men, but we are seeing the end of the first generation, and now you have their grand-kids coming in.

“We always put a bit of effort into Christmas. Twice a year we have an event for senior citizens – a four-course meal and drinks.”

With up to 40 people working in a variety of roles – full-time and part-time – between the two establishments, Mitton is one of the biggest employers in Ballyfermot.

His laid-back demeanor belies a steely determination to ensure both establishments remain top entertainment venues in the years ahead.

Upstairs in Tom Young’s contains a massive function room – more akin to a city-centre nightclub than a suburban venue.

Mitton plans to open this part of the bar for private parties in the New Year.