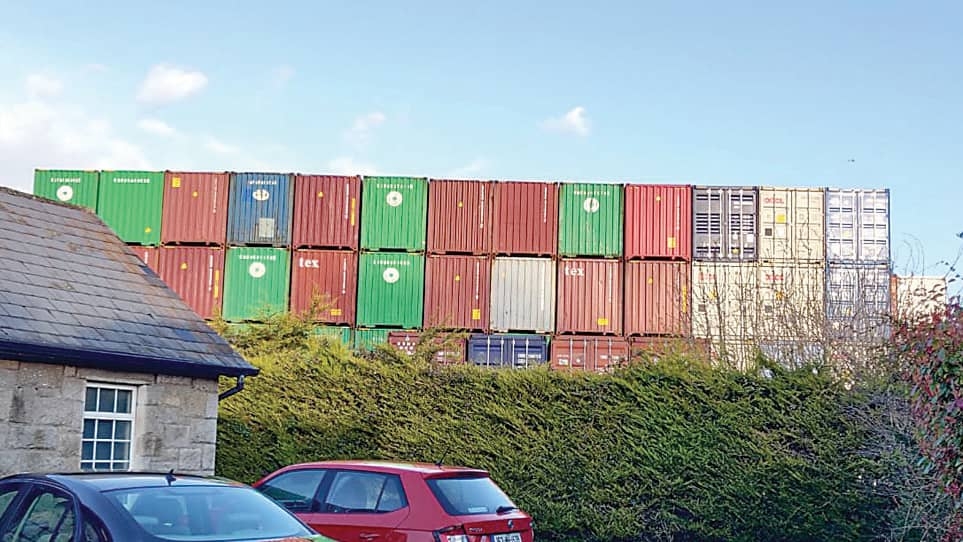 Local residents say they are living beside a ‘port’

RESIDENTS living beside a freight company in Clondalkin, have a complaint in with South Dublin County Council’s planning department, over the scale of activity beside their homes which they liken to a “port.”

According to residents on Ballymanaggin Lane, shipping containers began to be stacked up three and four high 12 months ago, at the David Nestor Freight Services Ltd yard in Crag Avenue Business Park.

The containers towering over the houses

The stacked containers at the site - located just north of the Grand Canal - are in sharp contrast to the size of the old cottages on Ballymanaggin Lane.

“It is wall to wall continuous containers. In early January they built a private road, truck drivers queueing up outside can now see into our kitchens from their cabins, it is like a port,” said Miguel Angel, a Ballymanaggin resident for five years.

“We have an open file with the council planning department. There is floodlights outside their fence. Residents want our privacy.”

Videos sent to The Echo by another resident reveal the loud banging noises containers make when they are moved about.

“It’s a nightmare living beside it, clouds of dust sweep over our house, truck drivers can see into our home since they moved the perimeter fence closer to us, and the sun is blocked by the containers so our house is dark in the mornings,” said the resident.

“You can hear the vibrations in the house every evening,” added Mr Angel.

Clondalkin Cllr Eoin Ó Broin (Ind) said it was an “unsuitable and unsustainable development for the area.”

The containers in Ballymanaggin Lane

“It belongs at Dublin Port or right next to the M50, not beside a residential area. Irish planning laws are very lax in the sense that the council cannot simply close this facility down,” said Cllr Ó Broin.

The only recent planning application on the site is for a 24 hour – open to the public – diesel pump station in 2019.

Circle K objected, stating diesel pumps would “introduce a service use to the general public into the industrial estate.”

The company also said the 24 hour nature has “potential for anti-social behaviour and potential to cause disturbance to the adjoining residents.”

The council granted a planning extension to the proposal for the diesel pumps, and are due to make a decision in December 2020.

The Echo contacted David Nestor Freight Services for comment, but did not receive a reply at the time of going to print.

Clare Morgan, a Ballymanaggin resident, fears the constant activity will devalue their properties.

“Talk about mental health, it’s just awful. Trucks start arriving at 6.30am. I have lived here for 40 years. It is horrendous,” said Ms Morgan.

Miguel Angel says residents are perplexed at the lack of enforcement by the council.

“The last planning permission we know about is from 1991. David Nestor moved in a few years ago.

At the moment they can do what they want. We talked to them before, asked why they are working on a Sunday, do they have a licence. There is no control, no planning, no protection.”

Sharon Greene, Staff Officer, Planning Enforcement, SDCC, confirmed that an enforcement file has been opened for the Nestor site.

“The matter is currently under investigation by the planning authority,” said Ms Greene.