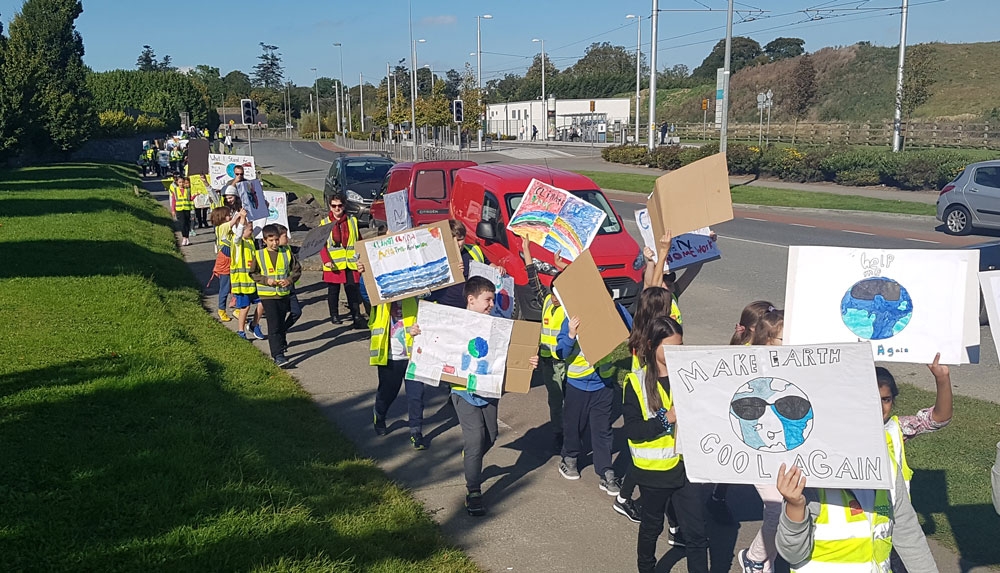 STUDENTS all across the globe took part in a coordinated climate protest today, with pupils from Citywest Educate Together NS holding a strike in their community.

In a movement to demand more action from the government when it comes to climate change, pupils from a number of local primary and secondary schools took part.

Students from Citywest Educate Together National School paraded up and down Fortunestown Lane (Picture: Citywest ETNS)

Many joined the protest staged in the city centre, where pupils from Colaiste de Bride in Clondalkin were interviewed for an RTE report.

More than 320 pupils from Citywest Educate Together National School staged a local protest, with all classes from Senior Infants up to Sixth Class engaging in the half-hour long strike for climate action on Fortunestown Lane.

Fourth Class teacher from Citywest ETNS, Eldon Hilliard spoke to The Echo about how the little strikers got on.

“There was a great reaction and support from the local community, when we were parading up and down Fortunestown Lane people were cheering us on and stopping to cheers us so it was great,” said Mr Hilliard.

“Children got time during class to design a and create a poster if they wished, and they were very excited to do their part.”

Campaigners filled the streets of Dublin around Custom House Quay and Merrion Square today but with the teachers unable to make it from Citywest ETNS, school principal Catriona Hand decided to have their own rally.

“We have members of staff that would be very passionate about climate justice and seeing something done about it, the parents association and parents themselves are as well,” Edlon explained.

“The principal was hearing it from the staff, parent’s association, parents and the kids, and we couldn’t attend the strike in town so we decided to try do our part here outside the school by marching all along Fortunestown Lane.”