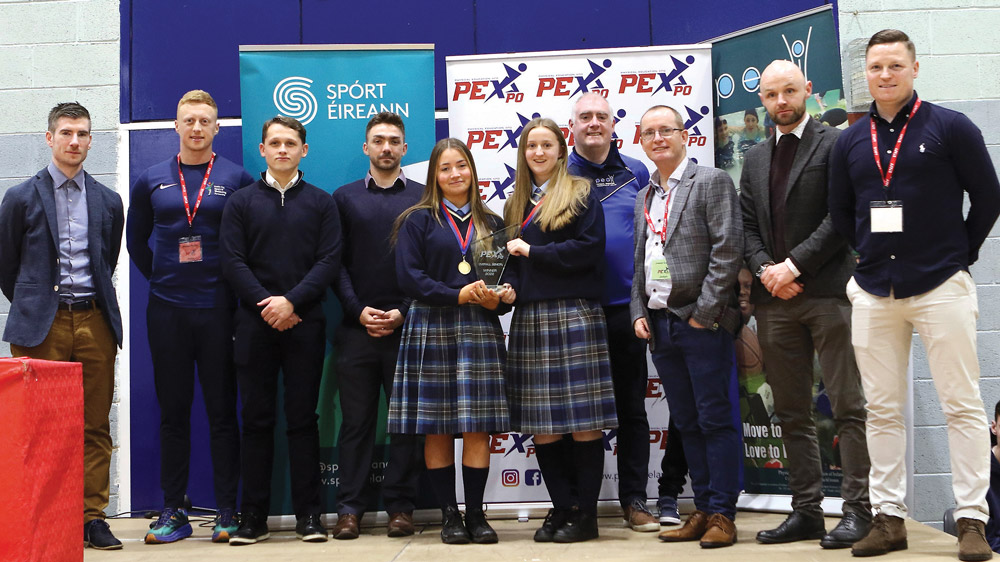 Local schools do themselves proud at the PExpo 22 in DCU

Dumbo the movie proved the inspiration for one of the more striking entries at the PExpo ’22 held at DCU last week.

“In the movie, Dumbo had a feather that he thinks gives him special powers, which of course it doesns’t.  It’s all in his head. That’s where we came up with the title of our project ‘The Magic Feather’,” said Lauren Coughlan and Posi Ishundaro, third year students at Tallaght Community School.

They corralled over forty of their school mates from three different years into an experiment to investigate how the power of suggestion  can influence performance  in sport.

“We divided our group in two and supplied them all with Fitbits. One group was given a Powerpoint presentation on the their Fitbit  and told that it was endorsed by a professor. We called that ‘The Spoof’! The control group was told  nothing.”

The result? Tested  over a short sprint distance, those in the “special” group showed a marked improvement in performance. They believed “The Spoof” in other words. Even more remarkably, boys showed by some way the greater improvement. This  of course, could have been due to other factors, which Lauren and Posi may well look into for their project next year.

For their efforts, the Tallaght pair won the junior  prize in the sports psychology category. They also took an award for the best effort by a school new to PExpo.

Dublin schools – and girls in particular – did well at this year’s PExpo. A project on  the relationship between motor skills and overall confidence from Caoimhe Molloy and Phoebe Lemon, St MacDara’s Community College in Templeogue, Dublin was named best senior (and best overall) project.

Best in the junior category (fourth year and under) were Alison Joyce, Leah Mullin, Stephanie Dan, Kamaya Gogna from St Joseph’s in Portrane, Co Dublin, for their project on ‘The effect of exercise on memory’.

PExpo, developed in association with the Physical Education Association of Ireland, was first held in 2015 with the aim of developing an understanding of PE, sport, fitness and nutrition among secondary school students. Projects are judged not only on content but also on presentation and the ability of the students to explain their project and defend their conclusions.