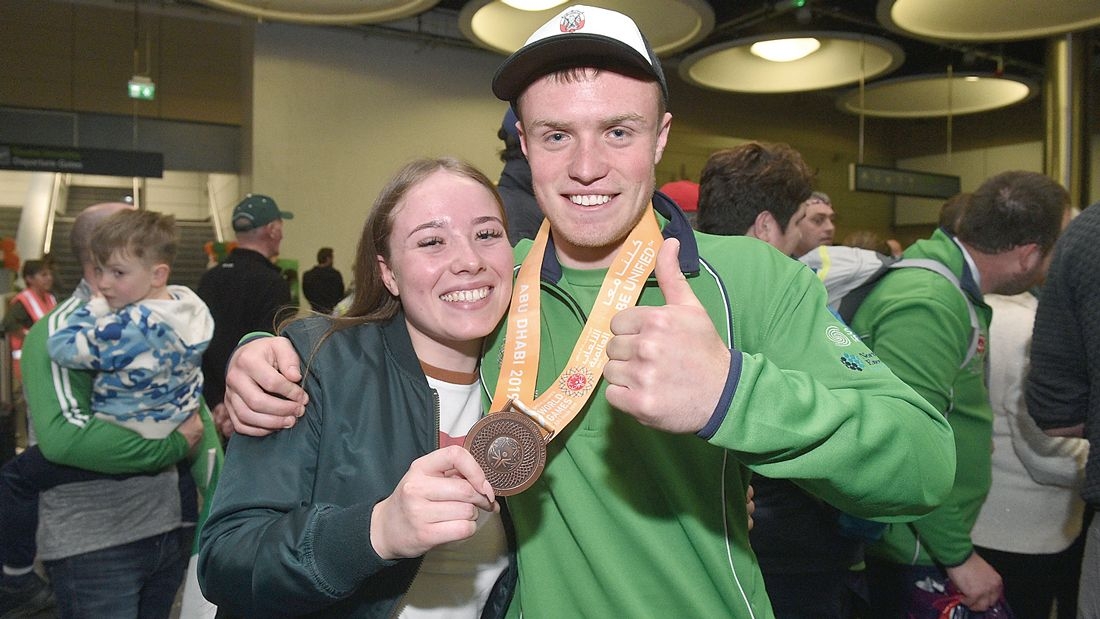 THE National Winter Games will be the primary event of 2020 that Special Olympics Ireland will be hoping to rescue amidst the COVID-19 outbreak.

The Games, which were due to take place in Northern Ireland from March 20-22, were postponed with the intention of rescheduling it towards the end of the year.

Daniel Byrne, from Lucan, with his twin sister Ciara after winning bronze with the Team Ireland soccer squad at the 2019 World Games

Catering for the sports of floorball and Alpine skiing, the event was expected to attract a total of 180 athletes to Lisburn and Craigavon.

Among them were up to 30 athletes from the Eastern Region including five from United Warriors in Rathcoole, namely Thomas Caulfield, Patrick Furlong, Kamil Stanislawek, Daniel Byrne and Alan Mahon as well as two Palmerstown Wildcats members, Lorcan Byrne and Stephen Murphy.

Some of the local athletes enjoyed success at last year’s World Games in Abu Dhabi from which Team Ireland returned home with a sensational haul of 86 medals -30 gold, 29 silver and 27 bronze.

The postponement of the Winter Games was a major disappointment for the athletes involved who have also seen various football and basketball leagues cancelled.

“Everything has had to shut down, training, activities and competition have all been suspended” said Lorraine Bracken, club volunteer with the Eastern Region.

“It’s had a huge effect on our athletes. Special Olympics clubs are not just a source of fitness for our members, but also a very important social outlet.

“But the athletes we have are very vulnerable. As well as the intellectual disabilities they have, a lot of them would have health problems too, so many of them would be high risk” she pointed out.

The decision to postpone the Games came just three months after it was announced that Sweden had to pull out from the hosting of the 2021 World Winter Games next February due to a lack of sufficient funds.

Yet it is hoped a new venue can be found for the global contest while efforts will be made to reschedule the National Games towards the close of 2020.

Certainly such a prospect will become a lot more difficult to realise if it drifts into next year given that there is already a busy programme in place for Special Olympics Ireland in 2021, featuring Area and Regional Games that will be used as a means of qualifying for the National Games set to be staged in 2022.