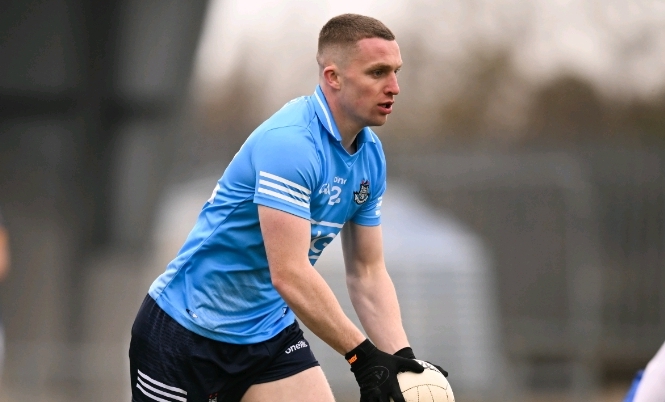 Harry Ladd was on the scoresheet for Dublin today

The Dublin men’s senior footballers produced a strong display at Netwatch Cullen Park this afternoon to claim the O’Byrne Cup for the 10th time with a 1-13 to 0-11 final victory over Laois.

Warren Egan (Ballyboden), Lorcan O’Dell and Niall Scully (both Templeogue Synge Street) were all introduced off the bench during the second half while Egan’s club-mate James Holland was also included amongst the match day squad.

In contrast to some previous O’Byrne Cup campaigns, quite a few household names featured in this Dublin success. Two-time Footballer of the Year Brian Fenton, Ciaran Kilkenny and Cormac Costello were notable inclusions in the starting 15.

Six-time All-Ireland winner John Small also lined out at centre half-back, but was issued with a red card on the half-hour mark. At the point they were reduced to 14 players, Dublin were on level terms with the O’Moore County (1-3 to 0-6).

Sean Bugler had shaken the Laois net during the early exchanges and Ladd also chipped in with a fine point. Thanks to unanswered scores from Cormac Costello and McGarry, Dublin still managed to bring a two-point cushion into the interval.

This put them in a strong position, but there was still reason to be wary of the Laois challenge. Managed by former St Jude’s senior footballer Billy Sheehan, the O’Moore men produced some fine displays en route to this showpiece.

Indeed, they subsequently levelled matters on the resumption before McGarry’s second point edged Dublin back into the ascendancy. Lee Gannon, Costello and Aaron Byrne contributed additional efforts to move the Metropolitans firmly into the driving seat.

Laois kept plugging the way, but the experience and know-how of Fenton, Kilkenny and Scully ensured the Blues emerged with the spoils and the silverware in the end.