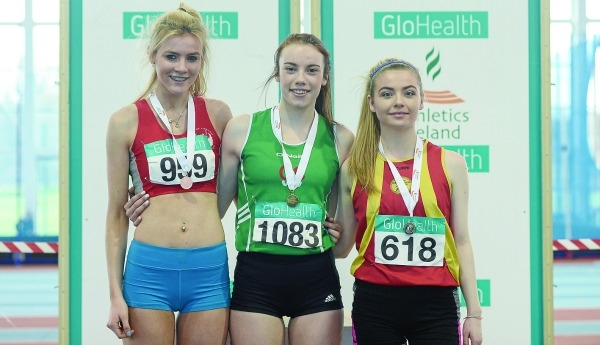 THERE was no shortage of local athletes on the podium at this season’s GloHealth Juvenile Indoor Championships in Athlone last weekend.

Tallaght Athletic Club’s Rhasidat Adeleke cleared a distance of 5.29m to capture the Under 15 Women’s Long Jump crown after having emer-ged second from the 60m sprint while her clubmate Saoirse Reihill earned bronze in the Under 18 Women’s High Jump after recording a leap of 1.50m.

A convincing win was recorded by Donore Harriers’ Louis O’Loughlin (Below) in the Under 16 men’s 800m which he completed in 2:02.49- more than two seconds ahead of his closest rival Conor Maguire from Monaghan.

Templeogue’s Shola Edodo (Below) did just enough to clinch the Under 18 Men’s 60m title, clocking 7.02 just ahead of Newbridge’s Luke Morris in 7.03.

An impressive time of 57.04 seconds was enough to see Mollie O’Reilly of DSD win out in the Under 19 Women’s 400m in which clubmate Rachel Dunne emerged third in 59.67.

Laura Gallagher of DSD blitzed the field to win the Under 14 Girls 60m Hurdles in a time of 9.28 after clubmate Cian Dunne finished fifth in the Under 14 Boys equivalent.

Brothers Pearse AC also had something to celebrate after their own Jennifer Hanrahan finished runner-up in the Under 14 Girls Long Jump with a best of 4.94m after having earned bronze in the High Jump.

There was a second place finish also for Tallaght’s Kayleigh Clarke in the Under 19 Women’s High Jump after she cleared 1.65m before DSD’s Rachel Dunne earned bronze in the Under 19 women’s 60m Hurldes.

In the Under 17 Women’s High Jump Tai Daly of DSD cleared 1.55m to take bronze with her clubmate Alejandra Garcia Herrez-velo in fifth position.

Sarah Rooney of Templeogue AC was third in the Under 12 Girls 600m before DSD’s Aimee Kenna crossed the line in second place in the Under 14 Girls 800m.

Katie Magee of DSD clocked 25.94 seconds on her way to bronze in the Under 18 Women’s 200m after having done likewise in the 400m while Donore’s Paul McDermott emerged third in the Men’s Under 19 contest.