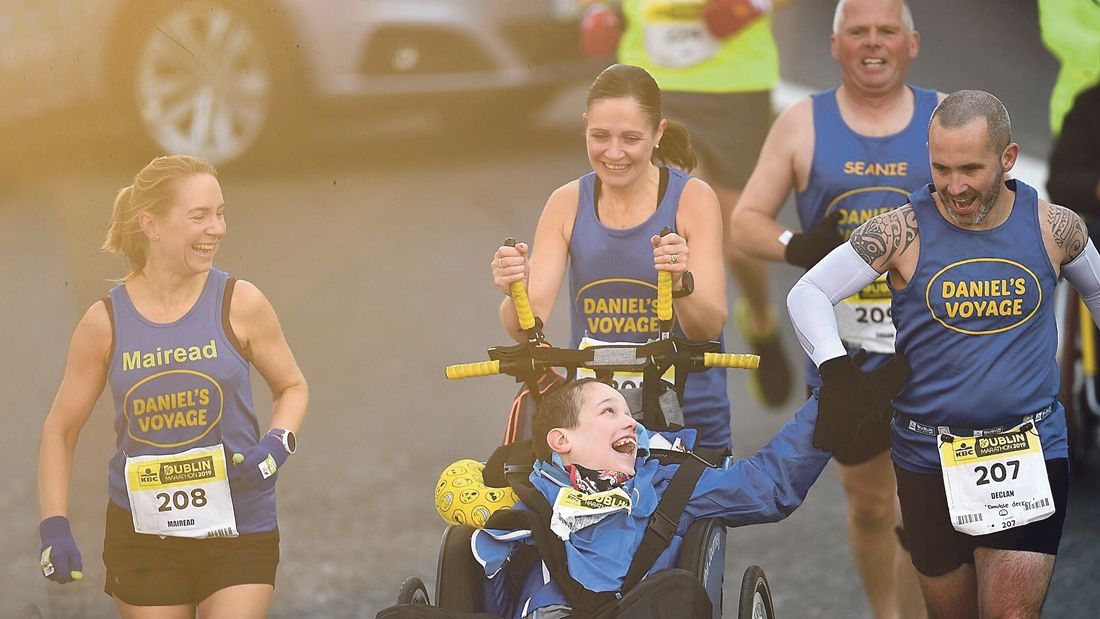 WITH more than 20,000 runners taking part in this year’s Dublin City Marathon there was a lot of local interest in last Sunday’s event which is now in its 40th year. Entries for the event, which is the fourth biggest marathon in Europe, sold out last December.

The race started at 8.45am and the 42km route took the competitors from the start on Fitzwilliam Square out of the city by Stoneybatter, through the Phoenix Park, back through Inchicore, around UCD and back into the city.

Tallaght’s Daniel Tighe (12) was competing in his third marathon.

Daniel  has a severe form of Sotos Syndrome, a condition that means he can’t balance properly, has an intellectual disability, impaired vision and no speech.

“We have been training the last seven months for this, the four of us each took turns pushing the chair for two miles each.

It went much better for us this year. We are all runners and we know the strength and conditioning work we need to do to push Daniel’s rig,” Sinead said.

Sinead paid tribute to her son who beamed and smiled throughout the 26.2 mile course.

She said: “For the whole race, Daniel beamed, laughed and smiled. He loves hearing his name and though he can’t speak he made ‘aah’s’ when he heard his name.

He must have know we were close to the finish line because as we neared it he took his hands out of his pockets and clasped them against his legs.”

Lucan teenager, James Casserly (13) also took part completed his fourth Dublin City Marathon. James who has cerebral palsy and juvenile arthritis was pushed in his assisted chair by his aunt, Alison Casserly, and was also accompanied by his father, Dan Naughton.

Team James were running in support of Barretstown. James has led the team in the marathon every year since he was 10 and they have raised over €100,000 for Barretstown since 2016.

James’ mum Vicki Casserly, who is Mayor of South Dublin County Council, told The Echo that she is so proud of James, Dan and Alison.

She said: “I could not be any more proud of Team James. They ran with determination, pride, love, fun and above all with mega support for Barretstown. We can’t wait until next year, We will be back.”

During the race, a Clondalkin-based Garda saved a man’s life.

Detective-Garda Niamh Connaughton was on duty as part of an armed patrol unit in one of the marathon’s ‘Cheering Zones’ near Chapelizod  when runner Giancarlo Isacchi collapsed on the course in front of her having suffered a suspected heart attack.

Det-Garda Connaughton rushed to his side and performed CPR and mouth-to-mouth on him.

Assisted by a colleague, she kept Giancarlo alive with breaths and chest compressions until members of Dublin Fire Brigade arrived at the scene and used a defibrillator to get his heart started again.

The two Gardai continued to work on him until he was taken by emergency services to the Mater Hospital, where his condition is now stable.

A Garda spokesperson told The Echo: “A male in his early 60s fell ill during the Dublin City Marathon on Sunday.

The male received further on-scene paramedic assistance and was taken by ambulance and under Garda traffic escort to the Mater Hospital where his condition has since stabilised.”