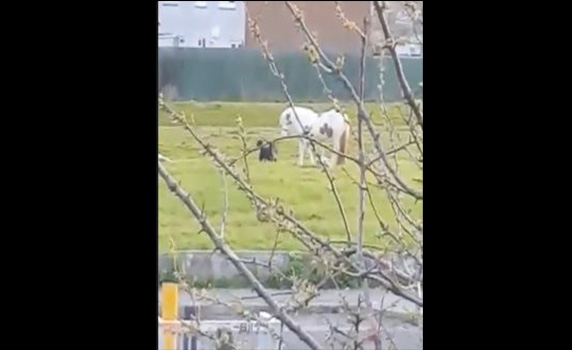 Loose animals pose threat to safety of children and adults

CONCERNS have been raised over the health and safety of horses living on public green spaces in Tallaght, after a video of a young horse being barked and snapped at by two local dogs was posted online.

The video, which was captured in Fortunestown last weekend, shows a young horse being aggravated by two dogs, who, according to local reports, spent a lot of time growling and snapping at the horse.

The Echo has in recent weeks also received additional calls from residents concerning the health of loose horses in their community, with fears raised both for the wellbeing of the animals and also for the safety of people living in the area, especially children.

Since the start of the year, South Dublin County Council has removed 29 horses from public areas across Tallaght – these horses were removed by a contractor working on behalf of the local authority.

Mary Maguire, senior executive officer in the council’s department of environment, water and climate change, said: “The council generally only reacts when horses are loose on land in public ownership.

“Horses straying onto land in private ownership is a matter for the landowner in question.

“Where horses are on lands in public ownership the matter is referred to the contractor engaged by the council for the provision and operation of the horse-seizure service and horse-pound facility.

“If the horses are reported to be loose on a public road or posing immediate danger to the public, these requests are dealt with urgently by the contractor. In some cases the assistance of the Gardaí is required.”

Over recent weeks, a number of residents have claimed that authorities do not respond in a quick enough timeframe to reports of loose horses.

However, Ms Maguire said: “All reports of loose or stray horses which are received from public representatives, members of the public and council staff are referred in a timely manner.

“Reports of sightings of loose horses outside of office hours should be made directly to the Gardaí, who will in turn contact the council’s contractor.”

A Tallaght Garda Station representative confirmed that members of the public should contact the station if there is an issue with a loose horse, outside of working hours.

The representative said: “We do contact the council’s contractor when we receive a call concerning a loose horse. We do not always attend the scene, but we do if there is a degree of cruelty or a criminal element.”

Since the start of the year, Tallaght Gardaí have responded to 11 allegations of animal cruelty, mainly involving dogs, horses and sheep worrying.

No prosecutions have yet been made.