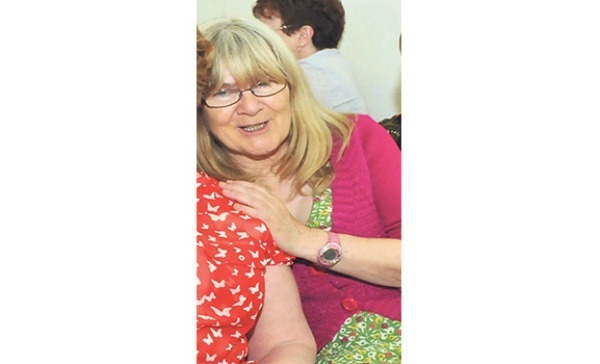 A TALLAGHT resident who tragically lost her life in a car crash in Tipperary was remembered this week for always embracing new opportunities and being a shining example of what active age is all about.

Living in Belgard, Anne O’Flanagan lost her life in Tipperary on April 29, when the car she was driving collided with a van on the Limerick Road in Roscrea at around 3pm.

Anne’s husband Diarmuid and another person were also in the car at the time of the accident and were flown to University Hospital Limerick with multiple injuries.

This week, Anne was fondly remembered by her friends in the Dominic’s Community Centre in Avonbeg, which held an emotional minute’s silence for the Tallaght mother before launching the centre’s Bealtaine programme, which celebrates creativity in older age.

Speaking to The Echo, Deirdre Cleary, the manager of Dominic’s Community Centre, said that Anne and her husband Diarmuid were an important part of the community centre and were at the heart of its active-age programme.

Deirdre said: “Anne was such a lovely, vibrant person, and herself and her husband were always so engaged in the centre, so considerate and always willing to help.

“Anne was a great motivator of others, she was very good at encouraging other people to engage in the programmes – and she had an amazing way with people.

“She really embraced life, took opportunities and was always learning – she was only here last Wednesday doing an Irish class.”

Deirdre added: “Everybody here at the centre is dumbfounded by the sudden loss of Anne. During the minute’s silence on Tuesday, a lot of tears were shed.

“Over the past few days the centre has become a space for people in gather in and remember Anne, and there has been a huge outpouring of grief for the loss of such a vibrant lady.

“Everybody at Dominic’s Community Centre sends their thoughts to Anne’s husband Diarmuid and their family and friends.”

Anne was laid to rest on Thursday.