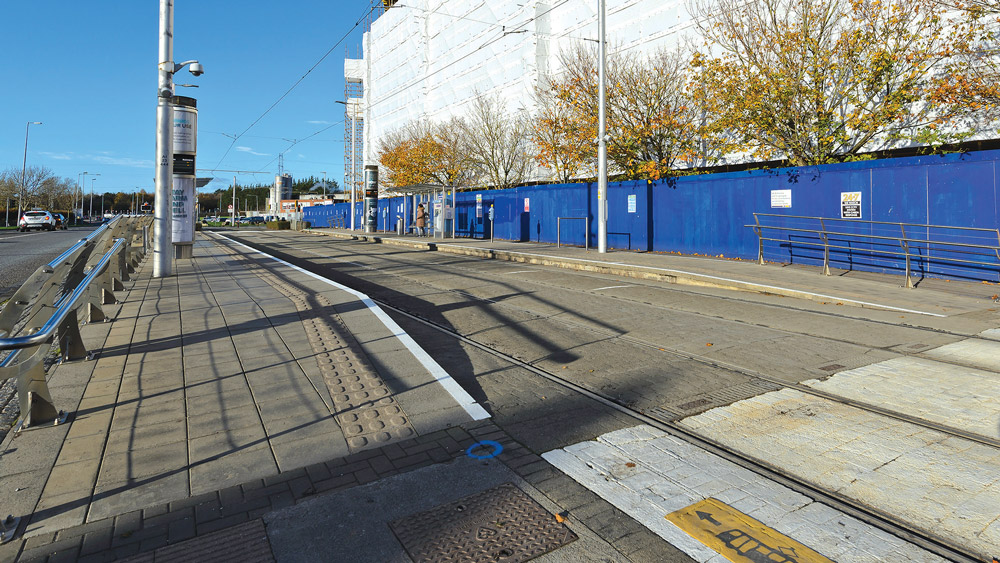 Cookstown Luas stop, the scene of the assault

A judge has suggested a young man take out a loan in order to offer an “appropriate” financial token of remorse to a Luas ticket inspector he assaulted.

Judge Elma Sheahan made the comment at Dublin Circuit Criminal Court last Wednesday while adjourning the case of Zachary McLoughlin (22), who had pleaded guilty to one count of assault at the Cookstown Luas stop on June 26, 2021.

As McLoughlin of Carrig-more Close, Citywest, Saggart made repayments to the loan, Judge Sheahan said this would “serve to remind him of the harm caused to the victim”.

She said the facts of the case were “troubling” as the victim had been “going about his business earning a wage when he had to deal with criminal behaviour”.

Judge Sheahan adjourned the sentencing hearing to May 10, 2023 when the case will be finalised.

Garda Derek Carmeady told David Staunton BL, pros-ecuting, that on the day in question, the victim, who works as a Luas ticket inspector, was on a service running near the Kingswood Luas stop with two colleagues.

Four men got on the tram and one of them, McLoughlin, was not wearing a mask. He became abusive towards the ticket inspector when he told him that he did not have a valid ticket.

McLoughlin continued to use foul language when the ticket inspector told him he would receive a fine.

The accused was told that he would have to get off the tram at the next stop, but said he was getting off anyway.

At the Cookstown stop, the victim moved towards the doors of the tram to tell the accused to get off the vehicle.

McLoughlin said, “You can’t do f***ing anything anway.”

He then attempted to headbutt the victim.

The accused left the tram and the victim followed as McLoughlin continued to shout abuse.

The victim then felt a blow to the left side of his face, and noticed blood on his cheek. He was taken to hospital and required nine stitches to his face. Photos and a medical report were handed into the court, which showed the victim has been left with scarring on his face.

Luas staff flagged down a garda patrol in the area. McLoughlin was in the vicinity of the Luas stop and was initially arrested on a public order charge as he appeared to be intoxicated.

McLoughlin later attended voluntarily for interview with gardaí and made admissions.

A victim-impact statement was handed into the court, but not read aloud. Mr Staunton said the victim had lost €1,800 due to being out of work for a period of time.

Garda Carmeady agreed with Donal James Pattison BL, defending, that his client had showed remorse and been courteous in his dealings with gardai.

Mr Pattison said his client had been the victim of a nasty prank at a party he was attending the night before the incident. He continued drinking the next morning and was travelling home on the Luas.

McLoughlin has no previous convictions and has not come to garda attention since this incident.

Mr Pattison said the “red mist” descended on his client on the day in question and he had shown nothing but “regret and remorse” throughout the court process.

His client had been very young at the time of the incident and his parents were in court to support him, Mr Pattison added.

McLoughlin is working and in education. Several references were handed into the court on behalf of McLoughlin, including that he had won a Young Person of the Year award.

Mr Pattison said his client had also brought €3,200 to court as a token of his remorse.

The court heard the victim was willing to accept this token of remorse.

Judge Sheahan noted that McLoughlin had attempted to headbutt the victim prior to the assault. She said the victim suffered from headaches and mental health issues since.

She noted mitigating factors include McLoughlin’s age, his early guilty plea and the level of co-operation.

Adjourning the case for six months, Judge Sheahan said the court considered the amount of €10,000 to be a “more appropriate” token of remorse. She said €3,200 should be paid over immediately with the balance to be paid within the next six months.

Judge Sheahan also ordered McLoughlin to participate in a restorative justice programme and the completion of a probation report.