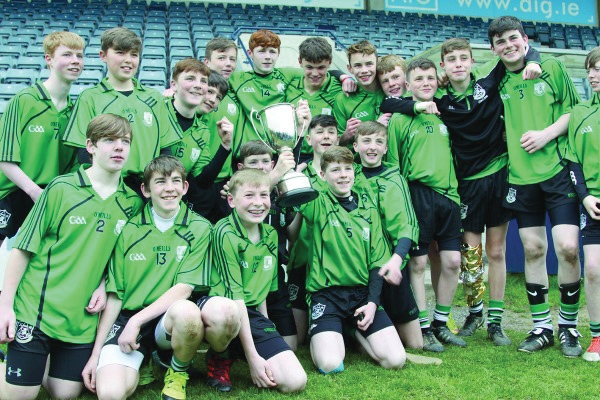 LUCAN Sarsfields U14 hurlers had plenty to smile about on Sunday when they claimed the Division One Féile crown for the very first time.

It took extra time to separate the teams with Lucan emerging 3-15 to 4-6 winners over Castleknock in Parnell Park.

Sarsfields showed real determination in extra time as they clocked up vital scores which proved the difference.
With Evin Dowling holding firm at centre back, Sarsfields drove forward in extra time with Eoin Power breaking through for a vital goal.

Sarsfields never looked back after this and further points from Dowling and Charlie Keller saw them past the finish line.

The first half of normal time was evenly balanced with Lucan going in 1-7 to 2-1 in front.

Castleknock started strongly and turned their early possession into a goal.

However Lucan hit back with four unanswered points through Dowling, and Oisín Ryan.

Jake Rooney tagged on a score but Castleknock hit back and streched the Sarsfields defence at times.

However after soaking up all the presure, Sarsfields got a big lift when Eoin Power gathered posession and blasted the sliothar to the back of thenet.

Sarsfields found themselves five points in arrears in the second half after conceding two goals and two points and they looked in trouble.

Colm Walsh then pushed Sarsfields a point clear in normal time but Castleknock hit back to force extra time.
However Lucan made no mistake in extra time when they broke through for vital scores.

Sarsfield now go forward to represent Dublin in the National finals in Waterford in June.

In the group stages, Lucan beat St Vincent’s, Clontarf and Thomas Davis before beating Kilmacud in the semi-final.