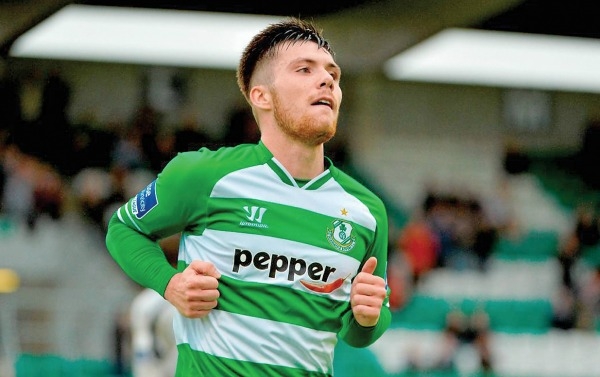 Miele wants Rovers to lay down a marker

BRANDON Miele believes wins in their next two outings will see Shamrock Rovers lay down a real marker in terms of their Airtricity League title ambitions this season.

Pat Fenlon’s side play host to defending champions Dundalk in Tallaght Stadium tomorrow night (Friday) hoping to close the gap on the current leaders to just a point before they then turn their attention to Monday’s trip to Turner’s Cross for a date with sixth place Cork City.

“It’s a massive weekend for us” Miele told The Echo. “We’ve got Dundalk on Friday and then Cork on Monday and if we can get two wins there it will really show that we’re up there” he insisted.

The Hoops will be coming into their clash with Dundalk off a very encouraging 4-0 demolition of arch rivals Bohemians in Dalymount last week in which Miele scored twice.

“It was a huge derby. I played in it last season and the atmosphere in this one was immense” recalled Miele.
“We had lost 3-0 against Derry the week before and the manager and fans were looking for a reaction from us and I think they got it.

“It was brilliant to get the win and to get two goals in it was just great.

“It showed that this squad has the ability and if we have that same fight and drive that we showed there we’ll be really challenging” insisted last season’s PFAI Young Player of the Year.

This huge derby win was followed up with a 3-0 victory at home to Athlone Town in the second round of the EA Sports Cup on Tuesday night.

Sean Heaney opened their account on 24 minutes before Sean Boyd made it 2-0 just before the break.

Trevor Clarke wrapped up the match with a third in the 79th minute in what was another timely boost ahead of the visit of the champions tomorrow.

Dundalk will be looking to make amends for their exit from the EA Sports Cup at the hands of St Patrick’s Athletic earlier in the week.

Yet prior to that they had maintained their place at the top of the Premier Division table with wins and clean sheets against Sligo and Longford.

And manager Stephen Kenny will be eager to see his charges return to winning ways in his home town of Tallaght tomorrow night.