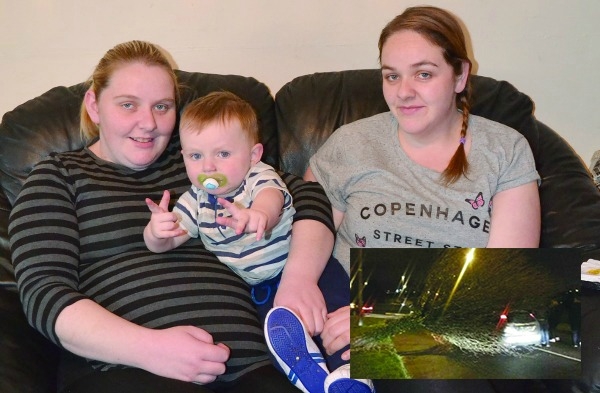 Lucky escape for family as tree crashes onto car

A HEAVILY pregnant woman, her sister and a toddler had a terrifying near-miss experience during the high winds on Tuesday, when a tree uprooted and landed on the roof of their car.

Clondalkin resident Aisling Friery, who is 37 weeks pregnant, was travelling to her partner’s home in Tallaght with her sister Roisín and 18-month-old son Ethan when Storm Barney uprooted a mature tree, which came crashing down on their Ford Focus as they travelled through Kilnamanagh at around 5.45pm.

Despite extensive damage to the car, the frightening incident, which put all three lives at risk, saw Aisling, Roisín and Ethan get the all-clear later in Tallaght Hospital – including Aisling’s unborn baby.

Aisling’s partner Gary Gobbett told The Echo: “The car is a write-off, the suspension is gone, the windscreen is cracked, side mirrors gone, bonnet crushed and the paint work is all scratched.

“However, we can get a new car – I’m just so happy that everyone walked away okay. This could have been so much more serious.

He added: “I was in Nutgrove when I got a call from Roisín screaming crying from the car, it was like a nightmare.

“Thankfully though, until I got there, people in Kilnamanagh came out of their houses and helped the three of them out of the car – some people even brought out food and seats. It’s an unbelievable community.

“They also called the emergency services, who brought the three of them to hospital and checked that everything was okay with the baby’s heartbeat, which we thankfully heard.”

According to local reports, residents have been asking South Dublin County Council to cut down a number of trees in the Kilnamanagh area ahead of the wintery weather.

However, with more than 15 trees falling in communities right across South County Dublin on Tuesday due to gale force winds and gusts of up to 125km, it is hard to ascertain whether excessive winds or weakness took down trees.

Gary said: “A lot of people who had gathered were quite angered over the fact that the council had been asked to cut down certain trees, I’m unsure if this tree was one of them.

“However, when we rang the council to report the incident, we were told they were too busy to attend and that they would be out later.

“A number of residents stepped up then, and one with access to a JCB pulled the tree off the car while another cut the tree up.

“There was also another tree on the far side of the road which was leaning quite dangerously, so a resident with a chainsaw cut this down too.”

He added: “We can’t thank people enough for what they did for us that evening.

“So many people came out and helped us despite the rotten weather and we’ll never forget it.”

South Dublin County Council was contacted for a comment, but a response was not received in time for print.