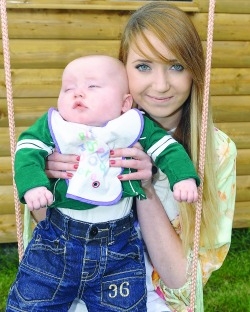 told that their eight-month-old baby boy, Luke, was diagnosed with the rare disorder, AADC.
The youngster is the only person in Ireland, and the youngest in Europe, to be diagnosed with the debilitating disorder.
AADC (aromatic amino acid decarboxylase deficiency) is a rare brain disorder which affects the body’s ability to produce neurotransmitters, dopamine and serotonin.
Emma and her partner Michael are now hoping to start a new Internet craze to raise money to help her baby son.

Emma, who lives in Clondalkin and is originally from Rathfarnham, told The Echo that it was “extremely frustrating” trying to get a diagnosis for their little boy.
She said: “Because he was premature we thought most of the symptoms were down to that. He was sleeping a lot and his eyes were crossed and he had very bad reflux, he was very irritable. We went to different GPs and eventually the emergency room and we felt like no-one was listening.”
The breakthrough came when his public health nurse noticed Luke was not meeting his milestones and referred him to The Coombe.
Emma said: “Our consultant ordered a lot of blood and urine tests. One of his urine samples was abnormal so we had to do another. It came back abnormal again. We were admitted into Our Lady’s Hospital to do further investigations – that was one of the worst moments of my life.”
Luke was brought for a brain and abdominal ultrasound – both of which were clear, leading Emma to ask doctors about his file.
She said: “I saw aromatic amino acid decarboxylase deficiency; lumbar puncture to confirm. His lumbar puncture results came back pointing towards AADC.”
Although Luke is the only person in Ireland with the disease, Emma and Michael have a good support network of family and friends and are part of an online group with other parents dealing with the disorder.
The eight-month-old baby boy has been started on a range of medications and has been accepted for treatment at Great Ormond Street Hospital in London.
The family has decided to raise much-needed funds for the AADC Research Trust with an online nomination game – The Cream Pie Challenge For Luke.
Emma and Michael launched the initiative on Saturday and hope that the craze of throwing cream pies at your friends for charity will catch on.
Emma said: “All you have to do is get a paper plate, fill it with whipped cream and pie yourself or a friend and nominate other people to do it and then donate on the Just Giving page.”
The family is aiming to raise €6,000 and already has over €1,500 in the bank from donations made by friends and family.
To donate or find out more visit www.justgiving.com/emma-styles1/ or visit the Cream Pie Challenge For Luke Facebook page for videos.