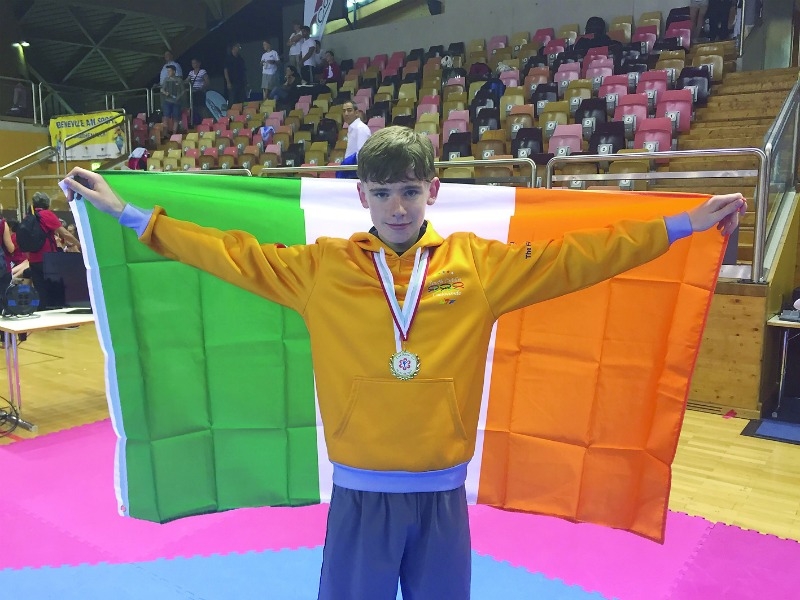 The Tallaght youngster saw off all opponents in his Cadet -53kg division to secure his second Luxembourg gold in as many years, adding to the -45kg Cadet prize he won last year.

Phelan’s quarter final match against Joshua Noel Jürgen from Germany proved to be his biggest challenge, as he needed to claw back a big deficit to a draw 8-8 and force overtime in which he won 9-8 on the golden point.

In the semi-final he saw off another German competitor Rufat Zaidov 15-6 setting up a title match with Leon Kaplan also from Germany who was recognised as the athlete with the strongest international record in the division.

Nevertheless, a measured performance saw Phelan secure the top spot on the podium with a 10-7 victory.

“This was a very important win for David” said his South Dublin TKD coach Robert Taaffe after his victory.

“He was out for the first half of the year due to injury and his National Team eligibility had expired, but today’s performance puts him right back on the National Team radar and we are hopeful he will go onto represent Ireland at the upcoming European Championships in Hungary later this year in September” he explained.

Phelan joined South Dublin Taekwondo four years ago in pursuit of Irish National Team representation and has now grown to be one of the top Irish athletes on the international circuit winning four ranking event medals in the past two years and becoming the club’s first Cadet National Team player.

This is his final year as a cadet, before he moves up to junior division in 2018.