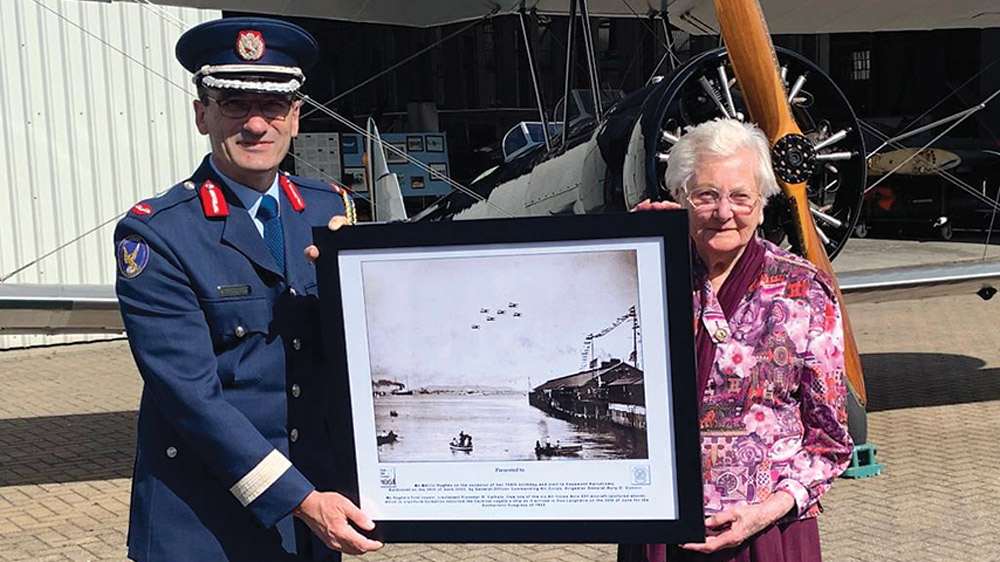 Brigadier General Rory O’Connor, General Officer Commanding of the Irish Air Corps, presented Máirín with a photograph of the flypast, with Fionnbar’s plane visible in its left wing position

ONE of Ireland’s oldest residents visited the Irish Air Corps Baldonnel base on Monday to celebrate another milestone.

Máirín Hughes, who celebrated her 108th birthday in May at Maryfield Nursing Home in Chapelizod, visited Baldonnel as her first cousin Fionnbar O’Cathalain served in the Air Corps from 1926 to 1965.

When Máirín was 18 her first cousin Fionnbar was one of the Air Corps pilots who flew in the flypast on the occasion of the Eucharistic Congress in 1932.

On the 90th anniversary of that famous day, Máirín revisited the base, recalling the excitement and pride she felt watching in Phoenix Park, as her cousin flew in formation high in the skies.

The Irish Air Corps said: “It was a real privilege to meet and chat with Máirín. She was able to tell us so much about her cousin Fionnbar and even showed us what position he flew in the famous 1932 Eucharistic Congress formation over flight.”

In the Air Corps museum, historian and curator Corporal Michael J Whelan explained to Máirín that Fionnbar was in the first flying training course for cadets when he arrived in Baldonnel in 1926, and in 1932 he was eligible to become a flight instructor.

Lt Col O’Cathalain was a student of the first Air Corps Flying Instructors Course in 1932 during which he piloted one of the six aircraft that escorted the Cardinal’s Legate’s ship into Dún Laoghaire on June 20, 1932, for the Eucharistic Congress.

The scene of the 1932 flyover is captured in a famous photograph of the aircraft in cruciform formation over the harbour.

Brigadier General Rory O’Connor, General Officer Commanding of the Irish Air Corps, presented Máirín with a photograph of the flypast, with Fionnbar’s plane visible in its left wing position.

Last year, Maryfield commissioned a ‘pope-mobile’ to bring Máirín out for a spin in Chapelizod and the Phoenix Park, where she met President Michael D Higgins’s wife Sabrina.

A sprightly centenarian, Máirín was born in 1914, but appears far younger than she is, enjoying walks daily in the scenic surroundings at Maryfield, reading, listening to classical music, and the odd drop of sherry.

A trailblazer for women in the workplace between the 1930s and 1960s, Máirín did a degree in science and a diploma in education at University College Cork, and worked in the pathology lab in UCC’s Department of Medicine for 14 years.