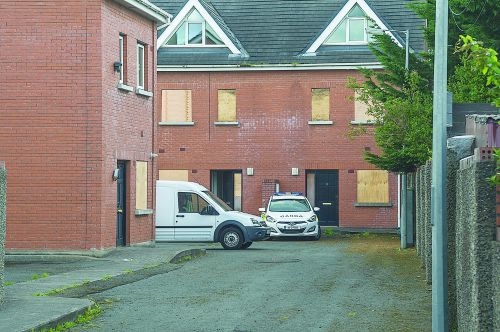 Man who died may have accessed house for shelter…

GARDAÍ have notified the family of a man who fell to his death at a vacant house in Station Grove on Monday night.

The Echo understands the man was from the Clondalkin area, in his late 30s, and may have been trying to gain entry into the house for shelter.

Up to five houses at Station Grove have remained vacant since they were built in 2006, and were boarded up on the ground floor last week. The Echo understands a number of homeless people in the area have slept in vacant homes at Station Grove in recent times.

It appears the man may have fallen to his death from the second floor of the property, whilst trying to access the house at approximately 9.30pm.

Gardaí were notified by residents, and the man’s body was identified by the state pathologist in Tallaght Hospital the following day.

A garda spokesperson said no foul play is suspected. Sinn Féin councillor Eoin Ó Broin described the incident as a “tragedy” and expressed his “deepest condolences to the family and friends of the deceased.”

Homelessness has increased in Clondalkin, Ballyfermot and Tallaght over the last number of years – many rough sleepers staying away from city centre hostels due to safety concerns. Cllr Ó Broin would like to see the vacant property occupied, but understands the asking price makes it too pricy for South Dublin County Council to step in.

“I was talking to NAMA but they have no relationship with the houses,” said Cllr Ó Broin. “Either developers are waiting for the market to improve, or banks are sitting on them. €400,000 is a high cost, especially when the council could build more homes for that price.

He continued: “But to have vacant homes during a homeless crisis in unacceptable. There are a number of other options available to council, including leasing, that could see the property occupied.”