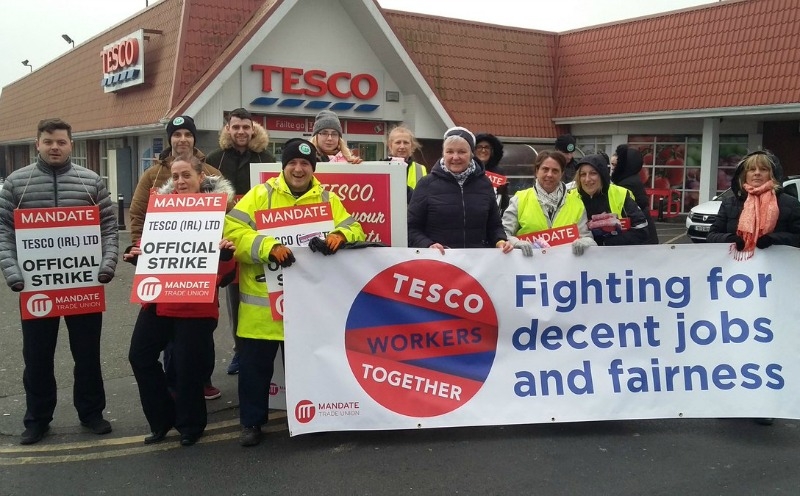 The dispute at Tesco between workers and the company looks set to escalate further after a proposal put forward by Mandate on behalf of the workers was rejected.

Staff have been picketing a number of stores including the one in Ballyfermot since last Tuesday as Tesco attempt to force changes to contracts of employment without agreement for approximately 250 workers employed before 1996.

According to Mandate General Secretary John Douglas, the union has made a genuine effort to achieve a breakthrough in relation to the ongoing dispute.

He said: “We tabled a document on Friday which, had it been agreed by the company at the time, would have allowed the pickets be removed on Friday or anytime over the weekend but they have not even bothered to respond to us.

“The next stage is it will be escalated. The pickets are very solid, there is fantastic public support.

“It’s unfortunate that we have no option but to escalate it, causing more disruption to the public and more financial hardship to the workers concerned.”

Meanwhile Tesco have said they are again calling on the union to accept the Labour Court recommendation.

In a statement the company said: “Discussions on Friday evening between Tesco and Mandate ended inconclusively and there are no plans for further talks.

“Further threatened strike action and the continuing calls for people to shop at non-union competitors is designed to cause damage to our business and we have called on all colleagues to show their support and vote against industrial action.

“We believe the Mandate leadership should endorse the outcome of the State industrial relations process which both Tesco and Mandate jointly agreed to utilise to resolve the changes to the pre-1996 terms and conditions.”