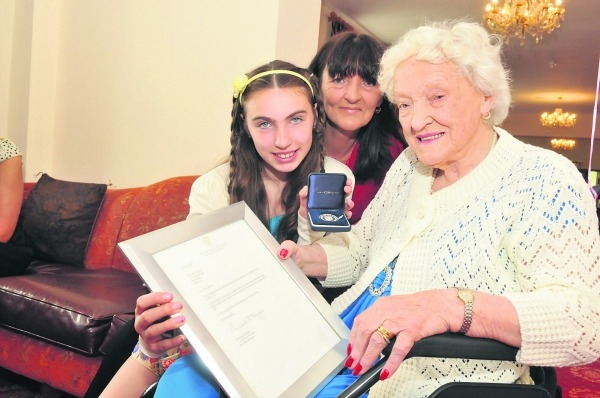 Mary, at 105 years of age, described as ‘a beautiful lady who lived life to the full’

BALLYFERMOT mourned the loss of one of its most revered characters this week with the passing of Mary Byrne (105).

St Matthew’s Church was heaving with emotion during a funeral ceremony on Tuesday, attended by well over 250 people.

Mary, a resident at TLC Home in Maynooth since 2012, became a regular feature in The Echo pages over the last number of years, celebrating her birthday parties in style with family and friends.

Born in 1910 in Erne Street Dublin, before going on to marry the late Patrick Byrne, Mary had eight children, 36 grandchildren and 47 great-grandchildren.

Fr Joe McDonald described her as a “beautiful lady who lived life to the full”, whilst Mary’s son Terry delivered a moving eulogy, linking the sad passing of his mother with that of a “great oak falling in the forest.”

Terry said his parents “set a high standard” for their children, and chartered the colourful trajectory of Mary’s life to those in attendance.

Grandchildren brought up gifts to the altar: Rory with a family photograph, Helen with nanny’s beloved pearls and lipstick, Geraldine with a deck of playing cards, Alan with a copy of the 1916 Proclamation, Louise with daffodils, Owen with her medals and scrolls from the President, Suzanne with a story book of her nan’s life, Seamus with a crossword book, and Aoife with a photograph of nanny.

Fr Joe said it was “fascinating to hear tributes to Mary from people in Ballyfermot” over the last few days.
“It strikes me that she has left a rich legacy for her family, and had a real zest for life,” said Fr Joe.

Mary was a woman who always dressed well (with pearls), a sign a “great depth and substance”, said Fr Joe.

An avid card player, in later years Mary took up bridge at the behest of Terry’s wife.

“She took to it not like a duck to water, but a shark to water,” said Terry.

“She wasn’t in it to pass the time,” quipped Fr Joe.

Mary’s favourite poem – William Wordsworth’s I Wandered Lonely as a Cloud – was read out during the service.

Mary is predeceased by her loving husband Paddy, sons Brian and Paul, and is survived by her children, Terry, Sean, Damien, Ann, Geraldine, Ursula and Helen, along with her 36 grandchildren, 47 great-grandchildren, family, friends and admirers.