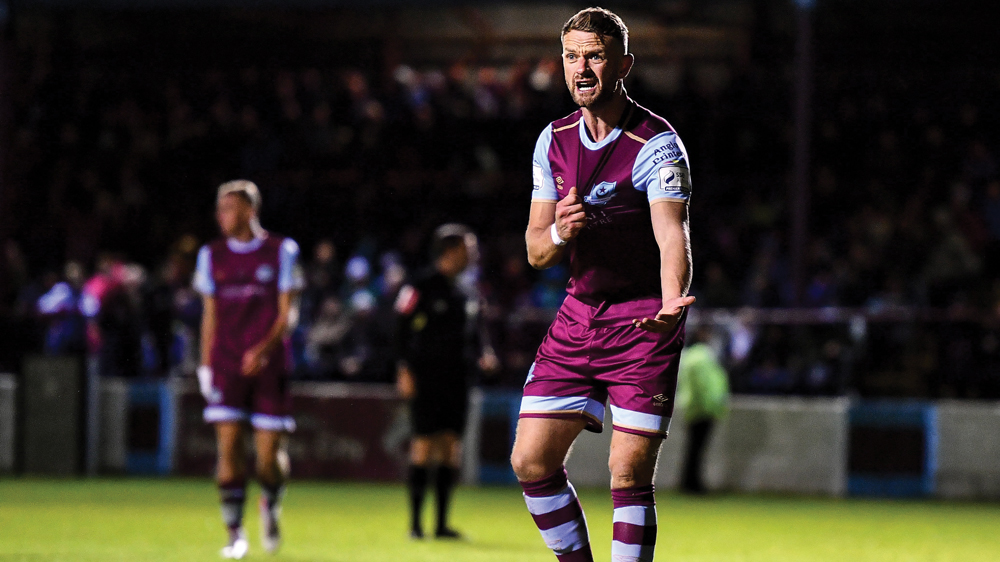 Massey honoured to captain The Drogs

KNOCKLYON’S Dane Massey has said ‘it is a massive honour’ to be named as the new captain of SSE Airtricity League Premier Division outfit Drogheda United.

Following an impressive debut season with the Boynesiders, Massey has been entrusted with this key leadership role for their forthcoming 2022 campaign.

The versatile 33-year-old will not be alone when it comes to on-field responsibility, but recognises nonetheless the importance of donning the armband for the County Louth side.

“I wasn’t expecting it at all” he said. “It’s a massive honour for myself to captain such a great club.

“Drogheda is steeped in history and a lot of great history. It’s a massive honour for me and I was only too happy to take it up. Like last year, we’ve so many leaders within the team,” Massey acknowledged.

“You have Gary Deegan there as well. There’s one man that doesn’t need an armband to voice his opinion and he’ll be vital for us next year.

“There’ll be plenty of individuals like that as well in or around the team. It’s not just going to be a one-man show, to be honest.”

A former playing colleague of Massey at Bray Wanderers, Kevin Doherty was recently promoted to the position of first-team manager at Drogheda having served as an assistant to Tim Clancy for the past four years. After guiding Drogs to a seventh-place finish on their return to the top-flight, Clancy was recruited by FAI Cup winners St Patrick’s Athletic as a replacement for the Dundalk-bound Stephen O’Donnell.

The latter appointment also piqued the interest of Massey, who featured alongside O’Donnell during a trophy laden six-year spell with the Lilywhites.

With Doherty moving into Drogheda’s hot seat, Daire Doyle comes on board as assistant manager following his own departure from Longford Town.

“There has been a lot of change, management wise, within the league” said Massey. “Stevie going back to Dundalk was a surprise, but Dundalk had their intentions and they knew who they wanted. They got their man. It took a while, but he went and it’s going to be an interesting season now.

“It’s a huge job for Tim [going to Pat’s]. It’s a club that has a great history in it and he’ll be expected to do great things there and I’m sure he will. He’s a good young manager and upcoming. It will be interesting to see how he gets on.

“The lads are used to Kevin, they know his ways and he knows the players as well.

“Daire is coming in as well and he’s excellent. He’s a very approachable person and I’m sure he’ll have his bit to add to our squad. Young players will feed off his enthusiasm and his quality in coaching.”

Although the Premier Division is not scheduled to begin again for another two months, Doherty and Doyle are already planning for the new season.

Drogheda will kick-start their campaign away to Finn Harps on Friday, February 18 before 2021 First Division champions Shelbourne make the trip to Head-In-The-Game Park seven days later.

Shels’ recent unveiling of Ballyboden’s Damien Duff as their new manager garnered considerable fanfare and Massey is looking forward to pitting himself against the Drumcondra men.

“Duffer, everywhere he has gone he’s been successful and I’m sure he’ll be a success at Shelbourne as well.

“It’s going to be a real challenge for us and maybe it’s a good thing we’re getting them so early as well. Catch them on the hop,” Massey smiled.