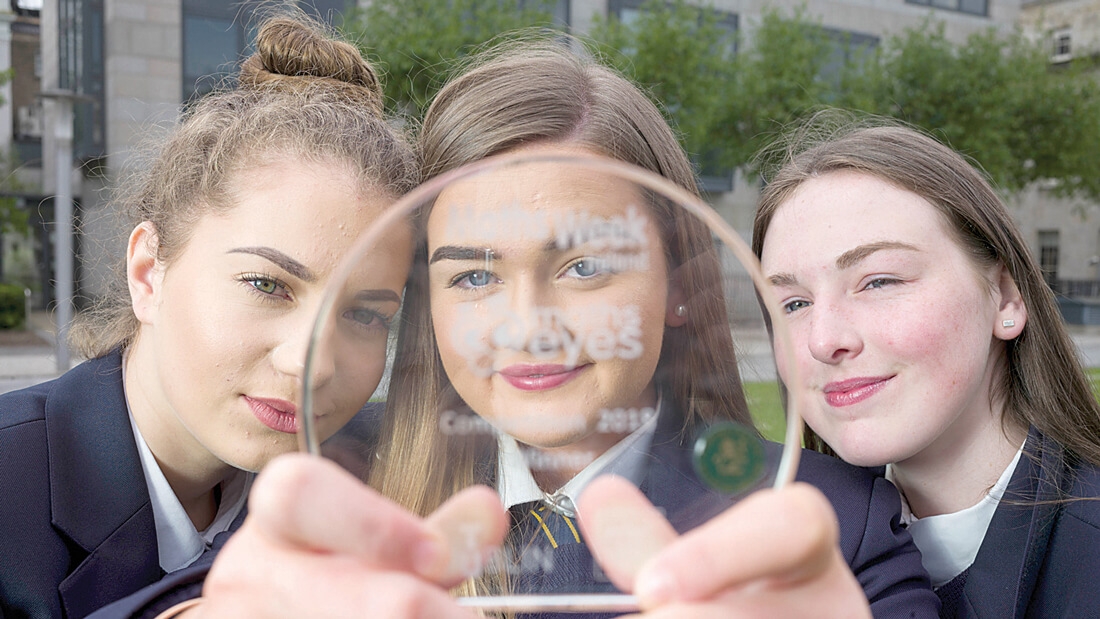 STUDENTS from St Dominics College in Ballyfermot had plenty to smile about this week after they won a prestigious Maths Eyes award from the Department of Education for their project in California Hills Park.

Praising the winning entry, Minister for Education and Skills Joe McHugh emphasised the importance of maths.

The Maths Eyes project is an initiative to encourage people of all ages to see mathematics as part of their lives and encourages a very positive attitude towards maths that can only enhance learning.

Initiatives such as Maths Eyes and Maths Week Ireland play an important role in encouraging and supporting learning of mathematics, which is important for each individual in their personal lives and also critical in building the skills needed for the 21st Century.

St Dominic’s teachers and project founders Emma Rochford and Aisling Griffin said: “As part of our Maths Eyes project, we designed our very own Ballyfermot Maths Trail in our local park. This project aims to provide the people of Ballyfermot with a fun and interactive activity to enable them to do maths in their local community.

“This allows people to identify the maths present in their local park while also helping them to adopt a positive attitude towards maths as they realise that in fact they can do maths while also having fun.

“This eliminates the need to print any documents prior to carrying out the activity.

“Our Maths Trail has been designed by the TY students of St Dominic’s College in collaboration with TU Dublin-Tallaght Campus and Dublin City Council. Topics featured in the Trail questions include; Space, Shapes, Measure, Time, Probability, Statistics, Ratio and Proportion, Time and Geometry.”

St Dominic’s school want to thank national Maths Eyes project co-developer Ciaran O’Sullivan and Chris Keogh of Dept of Mechanical Engineering TU Dublin’s Tallaght Campus for the latter’s innovative laser-cut top plates adorning each of the project’s ten posts. Dublin City Council’s Ballyfermot Community section provided logistical support and funding while the Council’s Parks’ Department was instrumental in providing a home for the project and bringing it to fruition in California Hills Park. Its hoped that the project will be operational by June 10