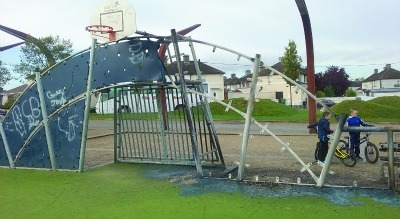 VANDALS destroyed one end of a basketball court in Ballyfermot over the weekend – causing thousands of euro worth of damage.

The incident occurred at Kylemore Park on Sunday night and it is the latest attack on the playground – part of the artificial football pitch was set on fire last Halloween.

Separate incidents of vandalism are visible in other areas of the park – with fences broken and gates and signs set torched.

Locals are tired of the anti-social problems being caused by a small group of “gougers”, according to Fianna Fáil councillor Daithí De Róiste.

Cllr De Róiste said: “There is serious anti-social behaviour by a group acting the maggot. It’s not fair on the residents in Kylemore.

“I’ve asked the council to board up an entrance to the park that would make it harder to access at night. They also need to look at CCTV cameras at the back gates.”

De Róiste believes the damage caused could cost up to €10,000 to remedy.

One resident said: “It was kids that were only 12 or 13 years old, throwing bangers around. The next thing you know, the place has gone up.”

Young boys playing at the facility on their mid-term break, were disappointed at the damage done to their playground.

“They burnt the bench, that’s the worst,” said one of the boys. Dublin City Council did not respond to The Echo at the time of going to print.