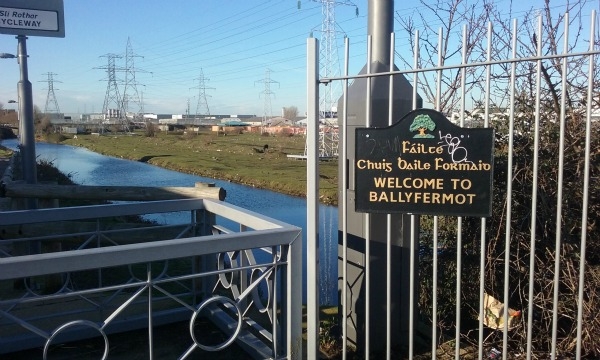 VOLUNTEERS with My Lovely Horse have blasted the mistreatment of horses on the Ballyfermot canal near Labre Park – citing up to 15 horses, some of whom are standing on broken bottles and eating rubbish.

That area of the canal was declared a “no-go zone” this week by independent councillor Vincent Jackson, who asked Dublin City Council what they are going to do about it at last night’s South Central area meeting.

The Echo viewed up to seven horses along the canal this week, grazing alongside rubbish tips, with a couple of burnt-out cars decorating the canal, on the opposite side of Kylemore Road bridge.

After an emaciated pony was dumped and left to die on the canal last week, volunteers with My Lovely Horse went back out to the area on Monday night after receiving a call, and were horrified with what they saw.

In a letter to Councillor Jackson, pleading for help, volunteers with the group said they spotted a horse tied up “in an awful state with no food or water.”

The horse was in “behind a gated area at the halting site” and it was “very young and standing on broken bottles with only rubbish to eat.”

Volunteers said they could not enter the site “without garda assistance” and walked up further, spotting “another 10 horses up beside the canal, eating rubbish.”

“For a horse to eat rubbish means that they are gone beyond hunger, they are miserable and in pain and no one is doing anything about it,” said the volunteer, who said the group are at their “wit’s end with the cruelty and neglect going on in the country.”

“Labre Park needs to be addressed no matter how fearful authorities are,” she said.

“I am not saying it’s just them that mistreat animals, but we are constantly taking dead or near dead horses out of there. Unlicensed horses are dying an agonising death. Something has to be done.”

The mistreatment of horses in the county is “symptomatic of elements of our society”, according to Cllr Jackson.

Cllr Jackson said: “There seems to be reasons for why we can’t do anything about it. Everyone is afraid to go on the site, which is almost a no-go zone. We’re talking about the welfare of living creatures, that feel pain just like humans.

“Nine horses were removed from Rossmore Drive before Christmas. They were freezing and standing in six inches of rain. If you’re going to have a horse, you have to spend money on food, stabling and veterinary fees.”

My Lovely Horse has pleaded with authorities to enforce legislation which states all horses need to be chipped and passported.

The group slammed the lack of government support for the issue, and feel both gardaí and the DSPCA should be given more resources and proper training to tackle the crisis.