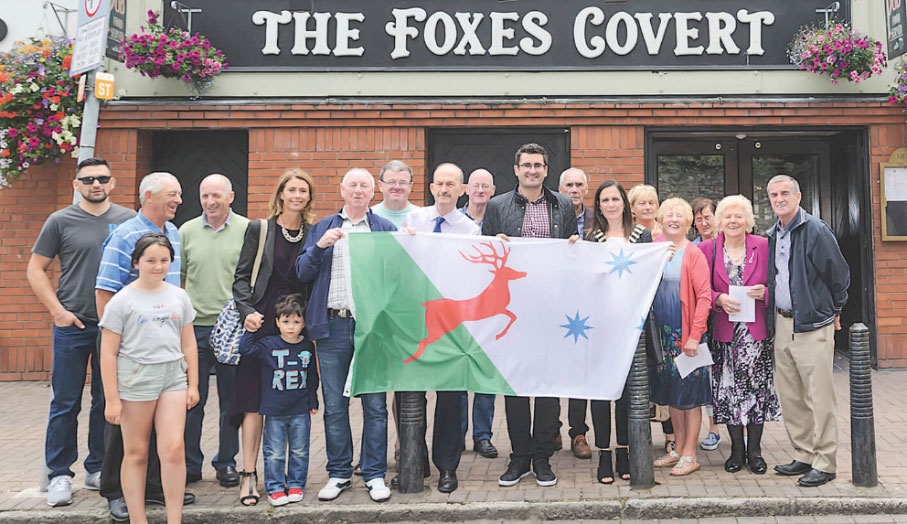 Molloy’s proudly fly the Unity Flag outside the pub

TALLAGHT’S Unity Flag is proudly flying outside Molloy’s Pub in the village, with other businesses and groups interested in raising the flag above their premises invited to come forward.

The flag, which symbolises Tallaght’s past, present and future, was first raised in Tallaght village last March, when the Unity Flag was hoisted above the Dragon Inn.

The flag, which was designed by Springfield resident Seos Ó Colla, with the input of some local groups, has a number of elements – including three blue, eight-pointed stars, that represent Tallaght’s past, present and future.

The green strip represents the Tallaght mountains and the area’s parks and fields, while the red deer symbolises the Deer Park that was once owned by the families of Old Bawn House in the 17th century.

There is also the mythological association of the deer with Fionn Mac Cumhaill and his son Óisin, who have links to Glenasmole.

Tallaght Community Council (TCC) and the Tallaght Historical Society have adopted the flag, which was also flown at Tallafest in June.

On Wednesday, August 8, TCC and Sinead Tighe, Tallaght Person of the Year, presented the flag to Richard Molloy.

Proud to be part of Tallaght

Speaking with The Echo, Richard Molloy, Director of the Molloy Group, said: “Molloy’s is part of the history of Tallaght since 1933 and we’re proud to be part of Tallaght and proud to be flying the Tallaght Unity Flag outside the pub.

“We are also celebrating our 85th anniversary this year, so flying the flag outside the pub ties in with our history here in the village too.”

According to Gerry Stockil, Voluntary Chair of TCC: “Our community is leading the charge to show the grassroot’s sense of confidence and pride of our hometown – we want to signpost Tallaght locally and nationally – through clear tangible physical road signage on the ground as well as with the flag in the air.

“We are proud of our hometown and it is important to physically show this.

“The symbols of using Tallaght in club names, having clear physical signage in Tallaght and extending the use of the community flag are very significant.

“They are a cost-effective way to nurture a strong sense of pride in Tallaght, the County Town.”

He added: “We are funding the cost of rolling out the flag to businesses and groups who want to fly it proudly – the first 10 to register with us who have a means to fly the flag publically will be accepted and supported.”

To get in touch with TCC about the Tallaght Unity Flag, which is also being flown by the Kiltipper Ramblers on their walking tour of the Camino in Spain, email tallaghtperson [at] gmail [dot] com