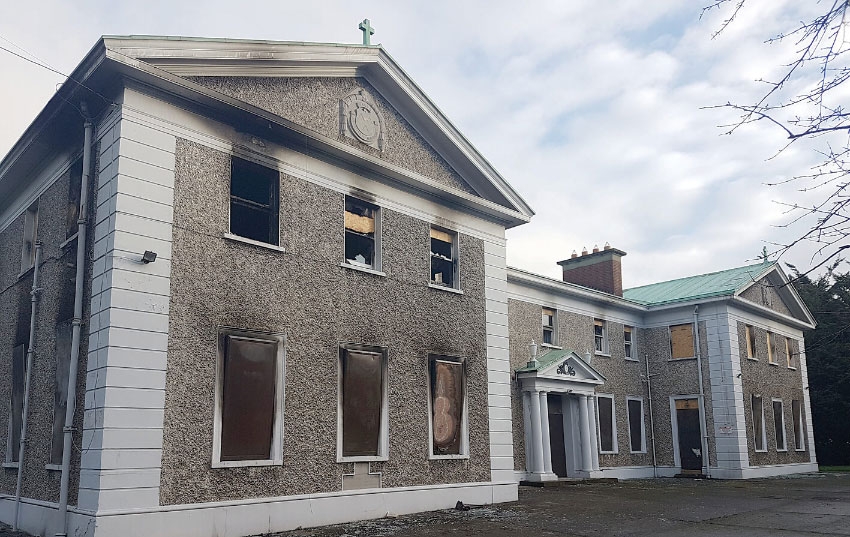 Monastery may be used for housing

THE new owner of the De La Salle land in Ballyfermot met with Dublin City Council on Thursday (January 24), to discuss potential plans for housing at the site, reports Maurice Garvey.

The monastery building was subjected to multiple fires last week by vandals, forcing Dublin Fire Brigade out on numerous occasions.

The monastery was set on fire recently

Nobody is currently living at the monastery. After it was sold to a private developer last September, the last of the De La salle Brothers moved to St John’s.

A major problem is ease of access to the vast grounds, which provide opportunities for anti-social behaviour.

The Echo understands the new owner has installed private security at the site last week, to prevent further incidents.

After similar arson attacks on the building last September, DCC demolished outhouse buildings to the rear of the property, including the former snooker and recreation room.

Sinn Féin Councillor Greg Kelly said the meeting on Thursday could see the developer proceeding with planning permission for apartments, or result in the city council buying the land back.

“Personally, I would like to see the land returned to the city council. We need a gaelscoil, a non-denominational or an ETB school in the area,” he said.

“This is something I and others would support. I know DCC is willing to buy the land. Split over the two sites, you could save the school. One of Brendan Kenny’s (DCC Chief Executive) original plans was for the monastery to become a nursing home and ultimately convert it to an elderly housing scheme.

“If the developer does plan to go ahead, it seems it will be for at least 100 apartments, and they would hope to have planning permission submitted in May.”

Due to the arson damage to the monastery building, Kelly believes it will likely have to be demolished.

“The fires were deliberate and they seemed to be bringing in material to the building to light it,” he said.

“Someone is going to have to pay the bill for the emergency services calling out multiple times. Either the money is recouped from the Brothers or the developer. DCC can’t be paying up costs for private land.”

Kelly said local councillors will learn of the outcome of the meeting between the developer and Brendan Kenny by Friday.

A spokesperson for DCC said: “This property and adjoining lands are owned by a private construction company, and DCC understands that the monastery building has been leased (short term) back to the previous owner (church authorities).

“DCC did carry out some demolition works on the site last year and the cost was recouped from the church authorities. DCC understands that the owner does propose to develop the site for new housing, but no planning application has yet been submitted.”